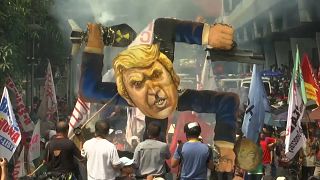 Updated: 13/11/2017
<p>Hundreds of protesters in Manila burned an effigy of US president Donald Trump on Monday, in protest against his visit to the Philippines for a regional summit.</p> <p>The demonstrators paraded the mock-up of the president, with four arms forming a Nazi-like swastika, and held banners reading “Ban Trump in the Philippines”.</p> <p>Trump was joining his Philippine counterpart Rodrigo Duterte and other world leaders at the 31st <span class="caps">ASEAN</span> (Association for Southeast Asian Nations) summit.</p> <p>Protesters tried to march close to the summit’s venue, but were blocked by riot police, who used water cannon to disperse the crowd.</p> <p>Ensuing clashes left several people mildly injured.</p> <p>Protest leader Renato Reyes of New Patriotic Alliance said the demonstrators opposed the meeting between Trump and Duterte because they believed it would not provide any benefits to the Filipinos.</p> <p>“This is a meeting between two presidents with a very bad, fascist mindset, and that is why we use the Trump fascist spinner with the swastika depicting the fascist orientation of the Trump regime,” he said.</p>
no comment