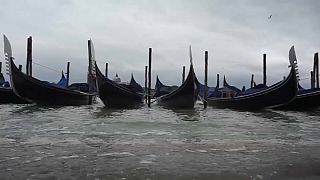 Water levels in Venice reached the highest level in four years this week, forcing tourists to wear plastic boot covers to get around the city.

Five percent of the city was covered with water that reached a level of 127 centimetres.

Authorities have set up wooden platforms in St Mark’s Square to enable tourists to move around.

The high water levels are thought to be the result of local tides being affected by a strong winter wind called the Bora, which affects the region regularly.

The flooding of Venice, the so-called acqua alta, happens around four times a year, though not normally to such extreme levels.