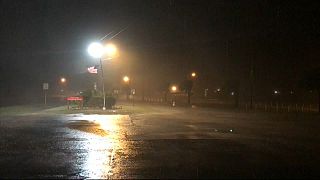 At the seawall in Palacios, Texas, the town may have been spared a disaster as the storm surge apparently did not breach the wall. Harvey made landfall Friday night as a Category 4 with 130 mph, (209 kph), winds.

It gradually weakened over the next several hours and by early Saturday, the National Hurricane Center said it back to a Category 2 – still sustaining winds of 110 mph, (185 kph), as of 3 a.m.

Early damage reports from Gulf Coast cities included collapsed roofs and walls. One community transported multiple people from a senior living home to the county jail for treatment after a roof caved in, but officials remained largely unable to assess the damage before daylight.

The National Weather Centre is in the process of downgrading Harvey to a Tropical Storm, but is warning residents that the worst is not over, and to beware of potentially widespread flooding.