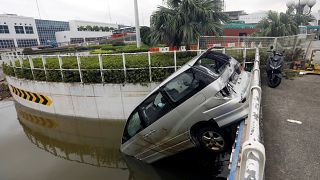 All of the fatalities happened in the gambling hub of Macau, where the storm caused a power blackout for about two hours, with disruption to mobile phone and internet networks. There was severe flooding on the streets, with some cars almost completely submerged, and the water supply was affected in some districts.

Typhoon Hato, a maximum category 10 storm, slammed into Hong Kong on Wednesday (August 23), lashing the city with wind and rain that uprooted trees and forced most businesses to close, while in some places big waves flooded seaside streets.

#TyphoonHato makes landfall in Zhuhai, S China’s Guangdong province on Wed, with gusts of wind up to 162 km/h pic.twitter.com/V5zhO3Grlf

Hundreds of flights were canceled, financial markets suspended and schools closed as Hato bore down, the first category 10 storm to hit the city since 2012.