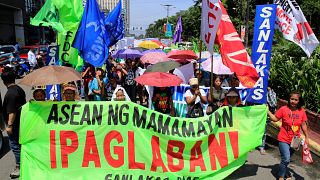 Filipino activists call for human rights to be on ASEAN agenda

About 300 activists marched to the Philippine International Convention Centre in Manila calling on foreign ministers attending a regional meeting to prioritise human rights and address key issues in agriculture, fishing and the South China Sea.
Activists holding banners condemning different government policies and progress made by the regional ASEAN body, which celebrates its 50th anniversary this year, were barred by police from reaching the venue where ministers from 27 nations will be meeting later in the day.
Foreign ministers from 10 Southeast Asian nations and their dialogue partners, including China, the United States, South Korea, Japan, Russia and Australia, are in the Philippine capital for the Asian Regional Forum (ARF). North Korea’s recent nuclear missile test is expected to top the agenda.