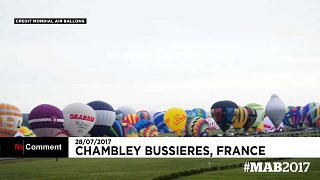 A new world record has been set at the World Air Balloon Festival in France at the Chambley-Bussieres airbase, near Hageville, eastern France.

A total of 456 hot air balloons took to the sky setting the world record for the greatest number of balloons aligned.

The balloons came in a variety of designs, including giant smiley faces and a kangaroo.

Over 45 nationalities were represented at the event and it took 45 minutes to get all the balloons in the sky at the same time.