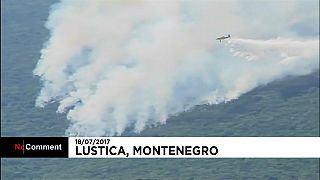 Firefighters in Montenegro battled to contain wildfires which posed threats to coastal towns on Tuesday, July 18.

Reports suggest a fire which started the day before near the Croatian border has almost been contained, but another that started in the early hours of Tuesday still rages on.

The blaze extended to only 300 metres from a village containing dozens of holiday homes.

Firefighters took up positions inside the village to protect the buildings should the fire spread further.