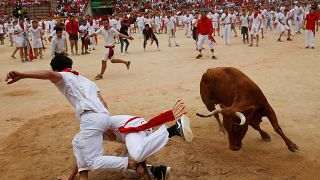 At least 10 people were hurt at Pamplona’s final bull run of 2017, though no one was gored as runners, many wearing traditional white shirts with red neckties, raced through the narrow city streets chased by a dozen bulls and steers.

Around 2,000 people a day take part in the centuries-old tradition, in which especially-bred animals are released from their pen to stampede through a 875-metre stretch of the city to the bull ring as runners attempt to dodge out of their way.

Made famous internationally by Ernest Hemingway’s novel “The Sun Also Rises”, the Pamplona bull run is the largest of many similar local events throughout Spain.

The bull run on Friday, the last of eight runs which start every day at 8 a.m. from July 7 to July 14, included bulls from the Miura ranch and was the fastest this year at 2 minutes, 10 seconds.

Once the morning run is over, the bulls face off with matadors in the city’s bull ring in the afternoon.