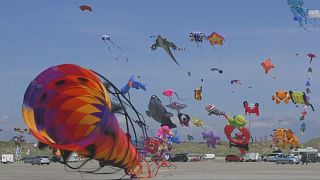 Thousands of kites fill the sky for annual festival

Thousands of creative kites have filled the sky for a festival on Fanoe island, off the south west coast of Denmark.

Around 5,000 kite flyers from across the world have gathered on the island, a short boat ride from the mainland, for the 33rd International Kite Flyers meeting.

Fanoe is known for its optimal wind conditions and a 700 metre beach allows plenty of space to fly the frames.

The festival was founded by German Wolfgang Schimmelpfenning in 1985

The official three-day event ends with a party and a kite auction but the meeting extends over two weeks.