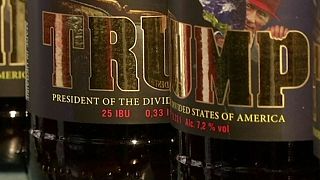 'Trump' beer on sale in Ukraine

A craft brewery in the western Ukrainian city of Lviv has begun producing a new type of beer devoted to the 45th president of the United States.

According to the owner of “Pravda” bar and brewery it is, ironically, a Mexican lager with lime…

The beer’s label features a portrait of Donald Trump, Russian President Vladimir Putin, a wall between the US and Mexico and main characters from the “Home Alone” film, in which Trump played a small role.

On sale for just a month, the beer has quickly gained in popularity.

Prior to the ‘Trump’ beer, the brewery had already launched a ‘political’ line featuring images of Vladimir Putin, Angela Merkel and Barack Obama.