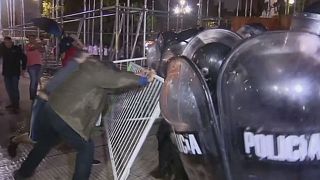 Clashes have broken out between protesting teachers and police in Argentina’s capital Buenos Aires.

The violence erupted in the early hours of Monday morning when security forces tried to remove the demonstrators.

The teachers had camped out in front of Congress in an attempt to install a travelling public school as a symbol of protest.

At least four people were arrested.

According to the protesters, the melee broke out when police tried to stop them putting up a white tent.