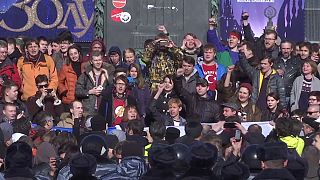 Updated: 27/03/2017
<p>Thousands of people crowded into Moscow’s Pushkin Square on Sunday for an unsanctioned protest against the Russian government.</p> <p>It was the biggest gathering in a wave of nationwide protests that were the most extensive show of defiance in years.</p> <p>Alexei Navalny, the anti-corruption campaigner who is leading the opposition to President Vladimir Putin, was arrested while walking from a nearby subway station to the demonstration at Pushkin Square.</p> <p>State news agency Tass cited Moscow police as saying about 200 people were arrested.</p>
no comment