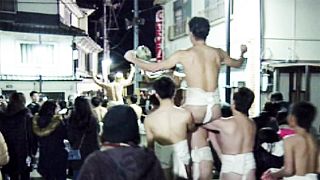 Around 10,000 men, wearing nothing but sumo-style loincloths, gathered at a Japanese temple on Saturday to scramble for sacred sticks called shingi.

The crowd waited for more than an hour for the sacred sticks to be thrown.

At 10pm, the lights were switched off and two sticks were thrown into the crowd from a temple window.

People jostled to grab them, and then run outside the temple grounds. The winners are considered the ‘fukuotoko’, or lucky men.