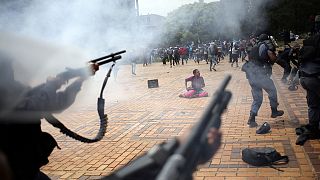 The clash occurred at the University of the Witwatersrand, which had announced it was re-opening after closing because of violent demonstrations for free education.

Adam Habib, the university’s vice-chancellor, had said police and private security guards would be on campus to help “take back our campus” on behalf of staff and students who wanted to return to class.

One protestor said she was demonstrating because the “university is not a pro-poor and a pro-black university”.