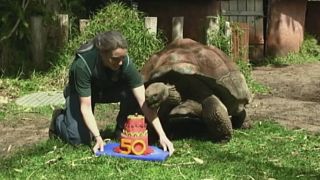 A Galapagos tortoise at Australia’s Perth Zoo celebrated his 50th birthday on Monday.

He’s called Cerro and weighs more than 200 kilograms, he was treated to a special birthday cake made from some of his favorite fruits such as watermelon, strawberries, kiwifruit and pumpkin, local media reported.

He was born at the San Diego zoo and was transported to the western Australian city in 2005, Perth Zoo says.