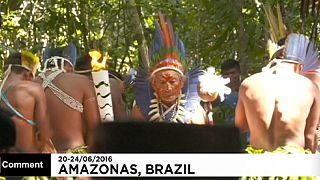 Olympic torch in the heart of the Amazon

The Olympic torch relay completed another week of its scenic tour through Brazil, where it will be carried by some 12,000 people in 335 cities up until the August 5 Opening Ceremony in Rio de Janeiro. The flame was received in all its glory by an indigenous ceremony in the heart of the Amazon. “We indigenous people are proud to receive the Olympic torch as we too are Olympic and indigenous,” said indigenous Shaman, Toroma. Travelling down the Amazon River, the torch was met by pink dolphins, excited crowds and traditional dancers, before visiting the capital of Acre state, Rio Branco, first founded by rubber-tappers. Before finally making it to Rio for the start of the Games, the torch will cross a total of 20,000 kilometers (12,427 miles) of Brazilian territory.