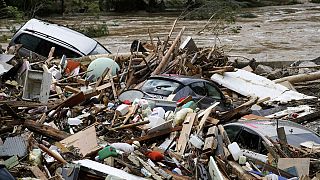 At least three people have been killed in heavy floods in southwestern Germany.

One man who was around 60 years old died in an underground car park, which filled with water too quickly for him to be able to escape, said Carsten Dehner, a spokesman at Baden-Wuerttemberg’s interior ministry.

In the town of Schwaebisch Gmuend, a fireman perished as he tried to rescue another person who also died, Dehner said.