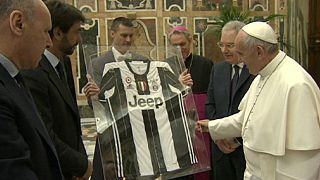 On Friday, Pope Francis welcomed representatives of Italy’s Serie A Football League as well as players from the Juventus and AC Milan teams ahead of the Coppa Italia final. Pope Francis reminded the players they are role models for many fans and thus urged them to display key moral values such as brotherhood, mutual respect, understanding and forgiveness.