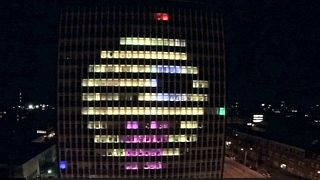 German students get to live every gamer's dream

Four German computer science students fulfilled every gamer’s dream this week by playing their favourite games on a large scale on the facade of their university’s main building.

The young scientists transformed the front of the Christian Albrechts University’s 14-floor main building into a big light show and were able to play Tetris, Breakout, Snake and Pong.

The project, called Project Lighthouse, included 57,000 LED lights placed on the 392 windows of the facade.