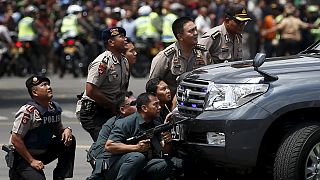 Militants launched a gun and bomb assault in the center of the Indonesian capital on Thursday, killing at least six people, police said, in an attack on a country that the self-proclaimed Islamic State had threatened to put in its “spotlight”. ISIL claimed the attack targeting foreign nationals and the security forces charged with protecting them in Jakarta.