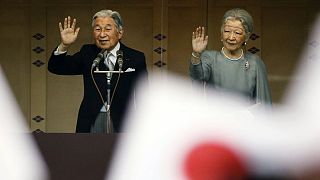 Updated: 24/12/2015
<p>Thousands of well-wishers gathered at the Tokyo Imperial Palace on Wednesday (December 23) to celebrate Japanese figurehead’s 82nd birthday.</p> <p>Some 23,000 well-wishers lined up, some from the break of the dawn, to march together into the Imperial Palace for a closer glimpse of Emperor Akihito, the Imperial Household Agency said.</p>
no comment