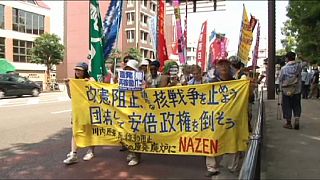 Hundreds of people in the Japanese city of Nagasaki held a rally to protest at Prime Minister Shinzo Abe’s security bills as the city marked the 70th anniversary of its atomic bombing.

Protesters say Abe’s proposed laws, which are under consideration in parliament, will jeopardise the country’s pacifist constitution that has safeguarded peace for 70 years