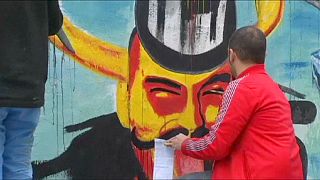 Argentine artists have been working on a 300-metre long mural in Buenos Aires to protest against Shell’s plans to search for oil in the Arctic.

The energy giant wants to start drilling off the coast of Alaska. It would be Shell’s first return to the Arctic since 2012, when it experienced a series of mishaps, including the grounding of an oil rig.

The protest in Argentina was part of a one-day Greenpeace International campaign to oppose Shell’s plans.