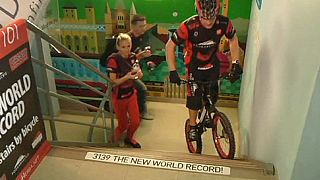 Record-breaking cyclist steps up to the plate

A stunt cyclist looks to have broken his own world record for climbing the most stairs on a bike.

Footage shows Polish rider Krystian Herba climbing the last of 3,139 stairs at Taipei 101, one of the tallest buildings in the world. He took 2 hours and 12 minutes to complete the challenge.

Herba, 33, from Rzeszow, held the last record of 2,755 steps, set last month at the Eureka Tower in Melbourne, Australia.

His feat was recorded on camera and will be sent to Guinness World Records for verification.