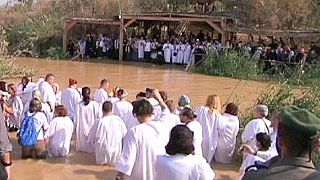 Orthodox Christians celebrate the baptism of Jesus at the Jordan river

Greek-Orthodox Christians and faithful from other Eastern Churches attended an annual ceremony at the River Jordan on Sunday (January 18), to commemorate the baptism of Jesus Christ. Thousands of Christians from the Palestinian Territories, Israel and Europe took part in the event at Qasr Al Yahud, bathing at the place where, according to Christian tradition, John the Baptist baptised his cousin Jesus.