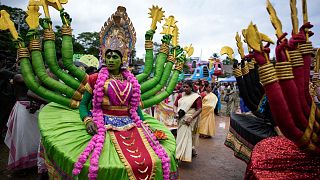 Known as 'God's Own Country', Kerala has long been considered a paradise destination in India, and for good reason. With almost 600 kilometres of Arabian coastline and its enchanting backwaters, this state on the Indian tropical Malabar Coast offers some of the most unforgettable experiences visitors can have in India.

"Except for the desert, we have everything in Kerala", says P.B. Nooh, Kerala Tourism Director. "We have the beaches, we have backwaters - Kerala is the only state in India to have them -, and, of course, we have the wildlife".

But beyond its natural beauty, Kerala stuns visitors with its vibrant and diverse cultural traditions, celebrated all year round with a total of some 1,000 spectacular festivals passed from generation to generation through the centuries.

Festivals are an important part of Kerala's identity, and a great way to get to know this magical Indian state.

"Every festival has its own unique story", says Nooh. "From Hindus, to Christians, to Jewish people to Muslims - all the four major religions are represented in Kerala, all groups live together peacefully. People celebrate all these festivals - from Christmas to Onam. This kind of religious tolerance you’ll find only in Kerala".

So if you're planning a trip to this enchanting state, these are the festivals you should include in your itinerary.

Kerala's boat festival is finally back after being cancelled for the past two years due to the COVID pandemic. The festival sees locals and visitors flocking to its famous backwaters to watch huge snake boats race each other along the state’s networks of lagoons, rivers and canals.

The boats are 30-metre-long wooden canoes, which can carry up to 100 rowers, an incredible number of people to see gliding swiftly through the water.

The festival, which usually runs from July to September, is made up of multiple races, so you'll have plenty of opportunities to watch the thrilling competitions (prepare to cheer) which are more about team spirit than rivalry. The most popular races are the Nehru Trophy Boat Race and Champakulam Moolam Boat Race.

Onam is Kerala's national festival and it's celebrated every year between August and September. It's a harvest festival full of grandeur, with trumpets, drums, dances, lights, elephants and boat races, linked to the Hindu legend of the return of King Mahabali to greet his subjects on Earth.

The festival is the most popular in Kerala, where celebrations are much bigger than for India's Diwali, and it's celebrated by everyone in the state, regardless of their status.

In April, Kerala celebrates Thrissur Pooram, one of the biggest temple festivals in the state, in honour of Shiva.

The festival has a 200-year-old history, focused on ten temples in and around the city of Thrissur. The main attractions are the parades of elephants ridden by people holding colourful umbrellas. The elephants travel from temple to temple, accompanied by the sound of drums and the cheering of crowds of people.

The celebrations usually end with a three-hour-long firework show.

In 1997 and then again in 2009, Attukal Pongala broke the Guinness World Record for hosting the largest annual gathering of women in the world, with 15 and 25 million women respectively.

During the festivity, celebrated between February and March, women from across the entire state gather at Attukal Bhagavathy Temple, dedicated to the goddess Attukal Amma - and only women are allowed to take part in the celebrations, which last ten days.

Foreigners and visitors - as long as they're women - can also take part in the yearly celebrations.

The beginning of the new year in Kerala is marked by Vishu, a festival celebrated in the month of Medam of the Malayalam calendar - April - all across the state.

The colour gold is key to the celebrations as it's considered auspicious, as are items like coins, fruits, vegetables, metal mirrors, rice and more. which families prepare on Vishu Day (Vishukkani) and children carry from house to house in Kerala's villages.

Celebrated between December and April, Theyyam is specific to the area of North Malabar, mainly the Kolathunadu region.

The festival is considered to be 800 years old and boasts 400 types of traditional dances linked to its celebrations, with performers often wearing masks, face painting, flowers and colourful costumes and recreating myths and legends.

As the best season to visit Kerala is considered to be the beginning of October to March, chances are that you’ll manage to see at least one of these spectacular festivals during your visit to the state. A list of all of Kerala's festivals, and a useful calendar, are available on Kerala's tourism website.