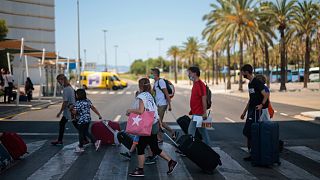 Palma de Mallorca airport plans to end the requirement for passengers to remove liquids and electronics devices from their hand luggage when passing through security.

The move is part of a four-year, €559 million project, which began in November, to redevelop and modernise the Son Sant Joan airport.

3D scanners are also being trialled at London’s Heathrow Airport. If the scanners are deployed, the security rules on taking liquids and laptops out of carry-on bags could be scrapped in the UK in 2024.

What are the security rules for liquids and electronics in hand luggage?

Currently, Palma airport - along with airports across Europe - requires passengers to separate all liquids from their hand luggage and place them in a clear plastic bag to pass through security.

Each liquid container is permitted to hold a maximum of 100ml.

Electronics such as laptops, power banks, e-cigarettes and spare batteries must also be removed from hand luggage and placed in a separate tray when passing through airport security.

Power banks up to 27,000mAH (100Wh) may be taken onboard flights in carry-on luggage only, and the capacity must be clearly stated on the charger.

Why do you have to remove liquids and electronics at the airport?

Liquid restrictions were introduced in 2006 after the British police uncovered a terror plot in which explosive devices had been disguised in soft drink bottles.

New CT scanners, similar to those used in hospitals, are capable of monitoring inside passengers’ hand luggage and identifying explosives without the need for liquids to be removed. This technology could also remove the need for restrictions on liquid capacity.

Similarly, laptops could be used to hide explosives or weapons, and may also block other items from being seen on security scans.

Lithium batteries, including power banks, meanwhile, have been known in rare cases to combust. This is why they are not permitted in the hold, and must be separated so security can assess whether their capacity fits within safety limitations.

After a summer of nightmare queues due to staff shortages at Palma airport, any move to streamline the boarding process will be welcomed with open arms.

Post-Brexit rules - requiring non-EU residents to have their passports stamped on arrival and departure - added to the chaos.

The requirement to remove liquids and electronics invariably causes a delay at airports, as many passengers wait until they are at the scanners to do so. Eliminating this step by using advanced scanning equipment is therefore likely to cut queue times.