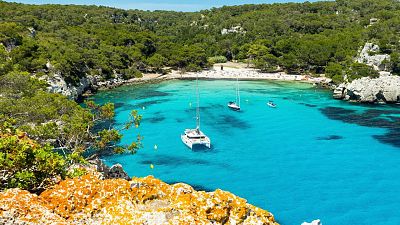 As the northernmost Balearic island, Menorca encourages its visitors to slow down, relax and unwind. With 216 kilometres of coastline, from the soft white sand beaches of the south to the rugged red coast of the north, the island is a fortress of calm.

Renowned as the birthplace of mayonnaise - invented by the chef of a French general who was laying siege to the British in the port of Mahón - the isle is now gaining a reputation for sustainability and adventure.

Although it’s whipped by the Tramontana wind through the winter months, Menorca’s usually balmy weather has made it a hotspot for tourism, with visitors from Spain, the UK and France flocking here in the summer months.

The whole island has been recognised as a UNESCO Biosphere Reserve since 1993, thanks to the abundance of native flora and fauna, the posidonia meadows in its clear waters and the birds of prey and flamingos that live on the shores.

So if you want to get away from it all, where should you visit? Here are some of our favourite things to do in Menorca, all year round.

What are the travel restrictions for Menorca?

Travellers from the EU and the UK need to show that they are fully vaccinated to enter the Balearic Islands. Passengers will need a COVID-19 vaccination certificate and will also have to fill in a travel health form before entering the country.

The rules for travelling from high risk countries may vary, you can find more information here.

Unplug and unwind from sunrise to starshine

“Menorca gets the first sun in the whole of Spain, because of our position in the east and it’s perfect to see sunrises and sunsets,” says Laura Ruiz Mercadal, Insular Director of Tourism for Menorca.

Menorca gets the first sun in the whole of Spain, because of our position in the east and it’s perfect to see sunrises and sunsets

“When you’re on holiday it’s always more well known to watch sunsets but the sunrise is very energising. When the sun comes, the day starts and anything is possible.”

But it’s not just at sunrise and sunset that you can appreciate the celestial beauty of Menorca. The island became a certified Starlight Reserve and Starlight Destination in 2019, the only Mediterranean island to receive both awards. This is thanks to low levels of light pollution, something the people here are working hard to maintain.

If you’ve managed to get up early enough to be blessed by Spain’s first sunbeams, then a morning hike should be next on your list.

The top hiking trail is Camí de Cavalls, which is divided into different sections depending on length and difficulty. In fact, the whole island is covered in a zigzagging network of public trails, so you can explore its diverse landscapes. From the talayotic monuments, built by the island’s prehistoric inhabitants, to the coastal cliff paths of Binigaus.

After a hike, food usually springs to mind, and you’re in luck as Menorca has been named European Region of Gastronomy for 2022.

There are events running throughout the year, including the Cow of Menorca Contest in March and Mahon Cheese Fair in October. You can see the full calendar here.

If you can’t make it to the cheese fair, make sure to sample some Mahón cheese before you leave the island. Made from cow’s milk, it’s a salty white cheese produced by local dairy farmers. Its salty flavour comes from the sea salt flecked grass that the dairy cows consume. With a paprika rubbed rind, it's a delight to eat either when it's young and soft or mature and crumbly.

Another event to pop in your diary is the Fiestas de Sant Joan, which takes place in June. A celebration of the Menorquín horse breed and its relationship with its rider, known as a ‘cavaller’. The festival sees the riders perform gravity defying ‘bots’, a trick where the horse stands on its back legs.

“They are at one, the rider and the animal, they feel like one and they think like one. Nowadays we also have fireworks every night, we have parties, it’s a great celebration,” explains Mercadal.

Another great thing about the island is the distinct difference between the north and the south.

Nowhere is this clearer than on Menorca’s beaches. To the north lie red sands, wild olive trees and wind-swept cliffs, hewn out of the rock formations of slate and red clay. The beaches in the north are generally quieter, with less tourist infrastructure, giving you a chance to properly get away from it all, as Mercadal points out. The southern beaches tell a very different story. Here you’ll find soft white sands and a clear aquamarine ocean blurring into the deep blue sky of the Med. The waters here are so transparent you’ll be able to take photos of the seabed.

“Menorca is for resting, living and feeling. Disconnect to connect with yourself. The concept of a holiday is to stop your normal life, get away from your phone. This is the best feeling that Menorca can offer you, a holiday means disconnection.”

Menorca is for resting, living and feeling. Disconnect to connect with yourself.

One of our favourite beaches is Cala Pilar, 23km from Ciutadella. While it may be remote, it’s also pristine, tucked away at the base of the Marina de Santa Elisabet hills.

The beach boasts a natural spring and the reddish rocks stand in stark contrast to the deep blue sea, making for a delightful, relaxing view.

Another firm favourite in the north is Pregonda, a horseshoe shaped beach complete with sand dunes and more craggy cliff tops. While access isn’t easy - there’s a 20 minute coastal path down from Platja de Binimel·là - the two tiny islands of Illot and Esculls de Pregonda facing the cove,and the sense of isolation, make it well worth the visit.

The southern beaches tell a very different story. Here you’ll find soft white sands and a clear aquamarine ocean blurring into the deep blue sky of the Med. The waters here are so transparent you’ll be able to take photos of the seabed.

Macarelleta is one of our favourite beaches in the south. Located 14km from Ciutadella, it’s another secluded jewel surrounded by pine trees and imposing cliffs. With calm waters and dazzling sands it can get pretty busy here during the peak summer months, so make sure to secure your spot early in the day.

Another charming location is Cala Mitjana which lies 7km from Ferreries, Menorca’s highest town. Part of the island’s Natural area of special interest, it’s a haven for wildlife, with bats, frogs and peregrine falcons sheltering along its small cliffs.