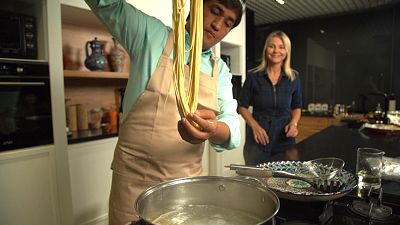 Bahriddin Chustiy is one of the most famous chefs in Uzbekistan. His goal is to make Uzbek food famous all over the world. He's published several cookbooks and travels around the country looking for inspiration.

At Tashkent's central market we choose ingredients for one of the most popular local dishes.

"A dish that you can't imagine Uzbek cuisine without," says Bahriddin.

"In Uzbek cuisine, spices play a huge role, and lagman requires two main ones - star anise and Sichuan pepper. Lagman appeared in Uzbekistan during the era of the Great Silk Road and it's one of my favourite dishes.

"First I put the meat broth to boil, then I marinate it, the longer the better.

For the Uzbek people dough is like meat, we can't imagine life without meat or without dough.

Making the dough is one of the trickiest parts.

"The most important thing is to process the dough properly," he says. "Dough loves fists. You need to knead it for at least 15 to 20 minutes. Then put the dough under cling film for 20 to 30 minutes so that the dough rests without drying out.

"We knead the rested dough to a thickness of 1 or 2 centimetres, cut it into layers and then make sausages. Then we make spirals and cover them with the film again. We need to do this at least 3 or 4 times.

"For the Uzbek people dough is like meat, we can't imagine life without meat or without dough.

"While the dough's rising, we prepare the vegetables for the sauce.

"The most important thing when choosing the vegetables is to have different colours in the sauce that combine well, that's what whets the appetite.

"Vegetables need to be fried very quickly so that they crunch and don't lose their beneficial properties."

Recipe: Pour water, eggs and salt into the bowl, mix well, add flour, and knead the dough. Let the dough rest for 20-30 minutes. Then knead the dough with your hands, cut it into strips and form "sausages", stretching a little. Spread each "kobaska" with oil and fold it into a container, cover it with cling film and set aside for 20-30 minutes. At the second stage, stretch the dough with your hands, rolling it on the table. Spread with oil, cover and remove for 20, 30 minutes.