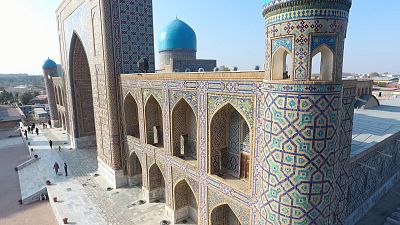 Samarkand is one of the key Great Silk Road sites – a crown jewel of Uzbekistan’s cultural legacy.

This summer the city hosted the 6th edition of the international congress, entitled the “Cultural heritage of Uzbekistan: Foundation of New Renaissance”, bringing together participants from 40 countries.

Abdukhalikov continues: For a number of reasons, Uzbekistan's cultural heritage ended up in various countries around the world and our aim is to consolidate it, in one catalogue. It is very important that people know of our cultural heritage."

Many objects that reflect Uzbekistan’s cultural heritage are on display in museums abroad. But the “Cultural Legacy of Uzbekistan in World Collections” project gathers this heritage into a collection of exquisite books. 60 albums have been published so far.

One of the recent catalogues presented at the congress showcases the Islamic Arts Museum in Malaysia, which has on display a rare 8th-century silk Sogdian dress.

“It is a full complete dress, it is made of silk and it has decorations all along the sleeves and also on the body, not many institutions have a complete dress. Most just have fragmented pieces,” says Nurul Iman Rusli, the deputy head of Curatorial, Islamic Arts Museum Malaysia.

Ornamentation is also one of the key elements of Uzbekistan’s cultural heritage. Each intricate shape and colour has a precise meaning.

Past generations were able to read these signs and symbols with ease. Forgotten nowadays, the ornaments are being revived in the “Encyclopedia of the Ornaments”.

The cultural legacy project continues to expand with the publication of more books planned.

“In the past, people put certain meanings into these patterns and they lived in this world, where each form had some kind of meaning,” says Elmira Gul, Cultural Heritage of Uzbekistan Project, Research Coordinator.

“They lived in a specific kind of information field. They believed in its protection and that it brings luck and good wishes. Now people look at it as just at a decor, and our task is to restore the understanding of the semantic fullness of these ornamental forms."

Social commentators say having these traditional ornaments and treasures abroad only serves to erode Uzbekistani culture. Now, preserving and celebrating cultural heritage is now one of the country’s top priorities.