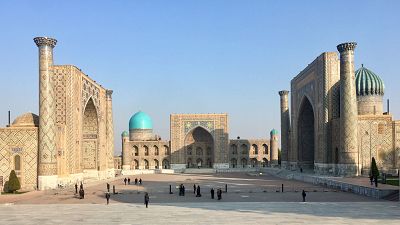 With almost half its landmass covered by desert, remote, mysterious Uzbekistan, a landlocked country of 33 million in Central Asia, is slowly starting to unravel its secrets to Western visitors.

Among its UNESCO World Heritage recognised towns and cities, the country has some of Central Asia’s most incredible sights along what was the Silk Road, the ancient network of trading routes that linked China with Europe.

This year marks Uzbekistan’s 30th anniversary of independence from the Soviet Union, with a calendar of Covid-friendly celebrations taking place in the capital Tashkent as well as the UNESCO World Heritage Sites of Samarkand, Bukhara and Khiva.

Travelling between these cities is now easier than ever thanks to new high-speed rail links that have reduced the journey time from Tashkent to Bukhara to three hours 40 minutes, two to Samarkand and from 19 to eight to Khiva, a distance of nearly 1,000 kilometres.

To entice foreign visitors back during the coronavirus pandemic the Uzbek government is offering anyone who catches COVID-19 while on holiday $3,000 (€2,558) to cover medical bills as long as they are travelling as part of a tour group.

Entry is visa-free for trips under 30 days and you’ll need a negative PCR test taken not more than 72 hours before arrival even if you’ve been fully vaccinated.

Tashkent: The leafy capital with an abundance of culture

Uzbekistan’s leafy capital Tashkent will be making merry throughout September and beyond.

With its tree-lined avenues and wonderfully ornate Metro stations, built by the Soviets in the early 1970s, the city of nearly two and a half million people lies on the north-eastern border with Kazakhstan. It was once a major trading post on the Silk Road, the ancient network of trading routes that linked China with Europe.

The country was once closed off to all but the most intrepid travellers, but since the death of hardline President Islam Karimov in 2016, changes are afoot. Gone were the traditional military parades, in their place gala concerts and firework displays.

One of the most hotly anticipated events in the capital is the return of the Tashkent International Film Festival from 28 September to 3 October, featuring a programme of international and rare archive films.

At the Centre for Contemporary Arts, an early 20th-century power station imaginatively transformed into an arts hub and opened in 2019, they’re hosting a year of events focusing on art, cinema, music, architecture and performance.

In 2022, art lovers will also be able to revisit the State Museum of Arts. Housing works once belonging to Prince Nikolai Romanov by Russian painters such as Repin, Bryullov and Tropinin, as well as 250 plus paintings by pre-revolutionary artists from Central Asia.

The museum’s 1970s Brutalist buildings have been reimagined by Japanese architect Tadao to include a remarkable new complex that will more than double the size of the museum.

Birthplace of the ferocious 14th-century Turco-Mongol warrior Timur (or Tamerlane), Uzbekistan fell under Russian rule in the 19th century before becoming part of the Soviet Union, along with other ‘stans’ such as Kazakhstan and Kyrgyzstan.

Medieval and Soviet traditions have become entwined with the modern: the roadside pomegranate seller who squeezes gallons of fresh juice from an old Soviet press; the Samarkand baker making flat, round loaves in a tandoor clay oven in the centuries-old method; and the working donkeys, tottering under huge stacks of cotton, one of Uzbekistan’s most important crops.

In the past few years, new roads and high-speed rail links have started being built, Hiltons and Hyatts opening apace and strict regulations relaxed.

Although Islam – introduced by the Arabs in the 8th century and all but suppressed under the Communists – is the dominant religion in Uzbekistan, it is a much more liberal version than that practised in the Middle East (women aren’t required to cover up, for example). The country’s diverse ethnic mix includes the majority Uzbeks, as well as Tatars, Tajiks and Russians.

Khiva, Bukhara and Samarkand, whose glittering mausoleums and madrassas adorn the travel brochure front pages, are the holy triumvirate of a trip to Uzbekistan.

Founded 2,500 years ago, Khiva, in the northern Xorazm Region, is like a living museum.

Most of its attractions are located within Ichon-Qala. Like the city’s adobe-walled core – the Kalta Minor minaret, a voluptuous stone tower, covered in glazed turquoise Majolica tiles. Or the 10th-century Juma mosque, with its 200 individually patterned wooden pillars. And the Kunya-Ark Citadel, former residence of the khans, whose observation tower offers sweeping views of the compact city.

In Bukhara, famous for its well-preserved medieval bazaars and caravanserais, you can shop for Astrakhan hats and Soviet coins and medals in the Taki-Telpak Furushon bazaar, or gaze at the 12-century Kalyan minaret. Made of intricately patterned baked brick, it’s 47 metres high and becomes a showstopper at night, when it is illuminated by hundreds of backlights.

The fabled Silk Road city of Samarkand offers what is arguably the pièce de résistance of all Central Asia’s Islamic masterpieces – the Registan, a vast public square flanked by three soaring mosaic-tiled madrassas, or religious schools.

The oldest one was built by Timur’s grandson, Ulugh Beg, in 1417. An astronomer and mathematician, he invited scholars from across the region to study there, making Samarkand the intellectual capital of Central Asia. Beg went on to found an observatory in the city, at the time considered the most advanced in the Islamic world.

Jules Verne’s 11-night Golden Road to Samarkand package starts from €2,338pp and includes flights from the UK, transfers, accommodation on a half board basis and local guides.

Uzbekistan Airways flies direct to Tashkent from London Heathrow on Tuesdays and Fridays. Tickets start at €645 return, including taxes.