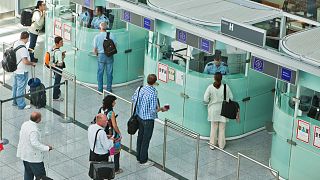 Europe is well known for being a difficult place to move to for non-European citizens trying to relocate for work.

Some countries in the EU - tiny nations like Liechtenstein and Vatican City, for example - have some of the strictest immigration rules in the world.

But countries across Europe are now facing severe labour shortages which have caused major disruption in recent months. Many are now making it easier for migrant workers to move to the EU for work.

Here’s a list of the countries where it’s easiest to obtain a work visa for non-European citizens.

Are work visas available for Germany?

Using a point system, the ‘Chancenkarte’ allows those looking for work in Germany to move to the country before having found a job or apprenticeship, rather than having to apply from abroad.

Applicants must be under 35 years old, have sufficient language skills to live in the country and at least 3 years of professional experience on their CV.

They also need to prove that they can afford to pay for living expenses for the time they’d be in Germany before finding a job.

Is it easy to get a work visa for Denmark?

Denmark is also in dire need of workers in all kinds of industries and is looking for professionals from other countries to step in and help.

Skilled workers are required from fields like science and engineering to legal and healthcare professionals, from teachers and IT specialists to electricians, blacksmiths and metal workers.

A full list of professionals needed is available on the country’s Positive List for People with a Higher Education and the Positive List for Skilled Work published by Denmark’s Agency for International Recruitment and Integration (SIRI). The lists were introduced on July 1 and will remain effective until December 31.

If you’re offered a job in one industry included on the two lists, you can apply for a Danish residence and work permit. Your residence permit will be valid for as long as your period of employment if you have a contract shorter than four years or will be four-year long if longer.

If you apply for a job on the list from abroad, you’ll be given a residence permit valid for one month before you start working so that you can settle in the country, provided that you prove you can sustain yourself in that period.

According to Statistics Denmark, there are currently 71,400 vacancies in the private sector in Denmark, with the highest number of these job openings being in the capital Copenhagen.

What visas are available to work in Ireland?

Getting a work visa is relatively easy in Ireland, which offers a number of options ranging from the short-term to the long-term.

While it’s necessary to already have found a job before being able to apply, the country is actively seeking migrant workers to fill vacancies in sectors which are experiencing significant shortages.

The country has two main work visas, the Critical Skills Employment Permit for highly skilled workers and the General Employment Permit. The first one covers professions deemed critical to growing the Irish economy, while the second covers all kinds of jobs. After receiving these permits, it’s relatively easy for people to apply for permanent residency in the country.

Ireland also offers a working holiday visa to citizens of Argentina, Australia, Canada, Chile, Hong Kong, Japan, New Zealand, South Korea, Taiwan and the US between the ages of 18 and 30 or 35.

Under this visa, migrant workers can stay in the country for up to 12 months, with the exception of Canadians who can remain for a period of up to 24 months.

What can apply for a Portugal Work Visa?

Portugal has recently launched a short-term visa for workers who intend to stay in the country for only one season. Under the Portuguese Work Visa, you are allowed to stay and work in the country for a maximum period of nine months. You are also allowed to work for more than one company, as long as it’s for a seasonal job.

Any other longer-term work visa will depend on your profession. Applications are known to take several months before being finalised, but once you obtain one you are allowed to stay in Portugal for one to two years.

Those who have lived in Portugal for five years are able to apply for permanent residence, after which they no longer need to apply for a work visa.

What visas are available for Finland?

Finland has launched a 14-day fast-track process to get highly skilled workers into the country, as well as their families. Those who can benefit from this service are defined by the Finnish government as “specialists” and start-up entrepreneurs.

After 90 days in the country, non-EU workers must apply for a residence permit.

What about other countries in Europe?

Other countries in the EU including Spain and Italy have recently announced they’re working on opening up more opportunities to non-EU workers, and will soon publish lists of vacancies they need migrant workers to fill.