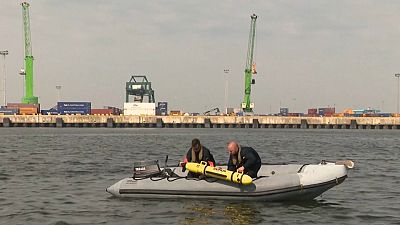 The two World Wars have long since ended, but they are still making their presence felt on Belgium's coast. Mines in particular still present a danger to shipping and beachgoers.

But Belgian authorities now have a new tool at their disposal in their hunt for explosives: an underwater drone called Remus.

At the Belgian naval base of Zeebrugge, a team of demining experts have been testing its sonar capabilities.

Bruno Lecoq, Head of the Mine Warfare Unit, said they can tell if "we found an echo on the sonar image that looks suspicious" or not.

"So depending on certain criteria, we attribute a classification to it. And based on that, we decide whether it`s necessary to investigate on location to determine whether the detected object is a potentially explosive device or not," he said.

Thousands of mines still on the coast

Between 100,000 and 300,000 mines are estimated to remain on the 65 km of Belgian coastline, left there the First and Second World Wars. The main objective today is to secure the ports and beaches.

Marie-France Godeau, a Belgian Navy Officer, said that mines are actually a historic threat, "due to the sheer number of mines and bombs that have been dropped in our waters in Europe during the two world wars. But unfortunately they also constitute a present threat".

Six specially equipped Remus ships are expected to be delivered to Belgium by 2030.

**For more on this story, watch our report in the media player above.
**

Is the global economy sliding into recession and what could it mean?