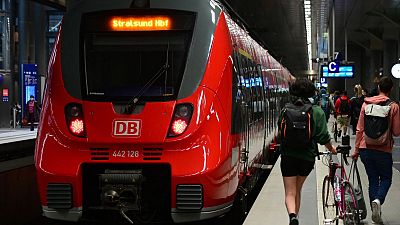 Germany’s €9 a month rail passes have proved so successful the government is under pressure to extend the scheme it introduced in June.

The heavily subsidised pass is on offer until the end of August and grants all German residents and visitors unlimited travel on regional transport.

A number of other European countries have also made trains cheaper as a way to tackle both the cost-of-living and energy crises.

Spain won widespread support last week for making all short and medium distance trains free of charge from September until December - a deal all the sweeter for being funded by a windfall tax on banks and energy companies.

So what’s Germany’s next move? Minister-President of Bavaria, Markus Söder has proposed an even more generous offer of €1 a day train travel.

In an interview with the German paper Bild on Sunday, he said, “The real problems will come in the fall. Then the prices go up again.

“My suggestion would be a 365-euro annual ticket for all local public transport throughout Germany.”

The Federal Ministry for Digital and Transport (BMDV) has not commented on the state leader’s suggestion. It’s clear, however, that the public is keen to see the pass replaced with another measure to make train travel easier and cheaper.

How successful has Germany’s ‘€9 ticket’ project been?

The current pass has led to a drop in congestion on roads in 23 out of 26 cities examined as part of a preliminary analysis by traffic data specialist Tomtom for the German Press Agency last month.

"Commuters lost less time driving to and from work in June than in May in almost all cities surveyed,” said traffic expert Ralf-Peter Schäfer, including those in Hamberg and Wiesbaden.

Around 21 million of the €9 tickets were sold in June alone, Association of German Transport Companies (VDV) figures show. That’s on top of the roughly 10 million subscribers who automatically received the discounted ticket.

“The number of 30 million tickets per month previously calculated by the industry has not only been reached, but even slightly exceeded," said VDV President Ingo Wortmann.

And, according to weekly surveys of 6,000 public transport users by national rail carrier Deutsche Bahn and VDV, one in five people have been encouraged to switch to public transport for the first time.

Could Germany launch a new ‘climate ticket’ in September?

The ticket’s popularity “increases the pressure as to what to do once the scheme has finished,” VDV managing director Oliver Wolff told British newspaper the Guardian.

One proposal from the association is to launch a new €69 a month pass called “the climate ticket” (or Klimaticket), similar to Austria’s pass of the same name. Wolff says this would be especially geared towards “car drivers who are willing to pay.”

It’s a little less ambitious than Söder’s idea, but at a cost of €2 billion a year, Wolff claims it’s financially doable with the remainder of funds that the government had earmarked for COVID recovery. He adds that travel bosses are ready to deliver the deal with government backing.

However there’s also a need to invest in Germany’s rail network, so it can cope with more commuters and travellers. Without this, the popular €9 project risks being looked back on as a “last hurrah” for public transport, the German Association of Towns and Municipalities has said.