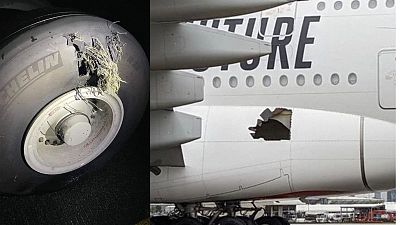 Passengers noticed the large hole gouged into the side of the plane when they disembarked in Australia.   -   Copyright  The Aviation Herald
By Lottie Limb  •  Updated: 06/07/2022

A plane that flew for 14 hours with a large hole in its side is a ‘one in a million case’, according to one aviation expert.

Passengers on the Emirates flight from Dubai to Brisbane were shocked to see the damage when they disembarked on Friday 1 July.

The airline says the hole was created when one of the Airbus A380’s 22 tyres burst shortly after take off. No passengers were injured, and flight EK430 was able to complete its journey as planned.

“It’s a one in a million case probably. It’s something that we don't see every day.”

One passenger from the flight, called Patrick, told Australia’s Courier Mail that he heard an alarming noise around 45 minutes into the flight.

“There was a loud bang and I felt it through the floor as well.”

“There was a loud bang and I felt it through the floor as well,” he said. “The cabin crew remained calm, stopped the food service and got on the phone and checked the wings, engines.”

On approach to Brisbane Airport, the crew informed air traffic controllers that they would need emergency services on landing, the Aviation Herald - which covers aviation incidents - reports.

Why did the Emirates flight continue after the bang?

It’s the kind of incident to send shivers down the spine of a nervous flier. Some commenters on social media have even questioned why the crew decided to press on after detecting a fault.

But from a pilot’s perspective, Dr Boroh explains, if there are no ‘indications’ showing up on the system then they can’t do much.

The damage occurred to part of the plane’s aerodynamic fairing - the outer panel or ‘skin’ of the aircraft.

“At no point did it have any impact on the fuselage, frame or structure of the aircraft,” Emirates stated.

It would have been a different story had the dent been made in the compartment where air is pressurised.

“If you hear a loud bang as a pilot, first things first the cabin crew will stop and inspect, taking a look outside the aircraft,” says Dr Boroh. In this case, “Of course [they couldn’t] see anything because the hole was underneath them.”

There are no cameras trained on this part of the plane, and no sensors to check for holes. With visual checks and indicators showing no issues, the pilots didn’t have cause to be overly concerned, he adds.

A third check they are likely to have made is contacting Dubai Airport to see if any part of the plane was lost during take off. But reports indicate the runway was clear of debris.

Passengers would have experienced a noisier flight than normal, but were not in any danger according to the aviation academic. He draws a stark contrast with an Aloha Airlines Flight in 1988, when an explosive decompression tore the roof and sides from the fuselage, killing one flight attendant.

The tragic incident changed the way Boeing 737s were made, with an extra outer layer of skin added, and led to tighter safety checks.

In response to Friday’s "technical fault", Emirates adds, "The fairing has been completely replaced, checked and cleared by engineers, Airbus and all relevant authorities.

“The safety of our passengers and crew has always been our top priority.”