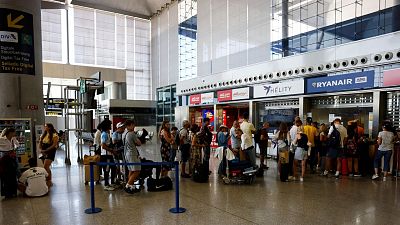 Travellers could face more chaos after Spain’s Ryanair cabin crew voted to strike for another 12 days in July.

The new action follows weeks of chaos for the airline, which faced six days of strikes in recent weeks and was forced to cancel 10 Spanish flights on Saturday.

The strikes come as European airports and carriers struggle to cope with a surge in travel demand, with thousands of flights cancelled over the past month.

How will the Ryanair strike impact your holiday?

Ryanair operates out of more than 20 airports in Spain.

However, the budget carrier does not expect widespread disruption, a spokesperson said.

“(We expect) minimal (if any) disruption to its flight schedules in July as a result of minor and poorly supported Spanish labour strikes”, an airline spokesperson said on Saturday.

But the named Spanish unions claim otherwise. Both has threatened to coordinate action with other Ryanair staff in Belgium, France, Italy and Portugal.

A USO spokesperson demanded that Ryanair executives “change their attitude” towards negotiations.

“The unions and crew of Ryanair show their protest again in this way and demand a change of attitude from the airline.

“The unions and crew of Ryanair… ask [the airline] to resume the negotiation of a collective agreement that includes decent working conditions under Spanish law.”

The strike coincides with industrial action by easyJet staff, who will strike for nine days in July.

Airports across the continent are contending with workplace walkouts.

This month, hundreds of British Airways staff at London’s Heathrow will vote on whether or not to walk off the job to protest pay conditions.

GMB - the union leading the UK strike action - has warned that British Airways will face a “gruelling summer of travel chaos” if the company doesn’t offer staff a pay hike.

Why are European airports so busy?

Roughly 191,000 European aviation workers have been made redundant over the pandemic.

Now, as travel demand surges, airports and airlines are too short-staffed to handle the influx.

The airline industry has launched a recruitment drive, but Air Council International - Europe's trade body for airports - predicts that delays are inevitable at two-thirds of European airports this summer.

British Airways was forced to scrap 8,000 flights in its March-October schedule this year, while easyJet has reduced its schedule by roughly 40 flights per day for the rest of June.

🛫 Is your flight delayed or cancelled ? Check its status below

If you've experienced any hellish queues or travel nightmares, let us know on Twitter @euronewstravel.