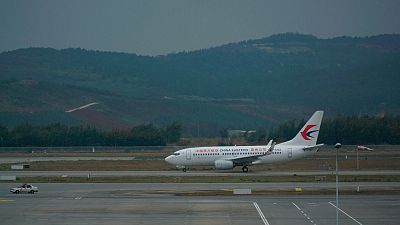 A China Eastern Airlines plane taxis on a runway at Kunming Changshui International Airport, where MU5735 was destined before the crash.   -   Copyright  AP Photo/Dake Kang
By Lottie Limb  •  Updated: 22/03/2022

The Chinese plane that crashed yesterday afternoon was considered one of the safest in the world, according to aviation experts.

The Boeing 737-800 model, flown by China Eastern Airlines, was carrying 132 people from Kunming to Ghangzhou cities when it suddenly plunged into a hillside in the south of the country. .

Tragically, no survivors have yet been found by rescuers. Chinese President Xi Jinping has launched a major investigation to determine the cause of the crash. China Eastern’s entire fleet of Boeing 737-800s have been grounded in the meantime.

Aviation experts are baffled by what could have happened to the jet, which was less than seven years old. It is a model of plane with a crash rate of 0.24 per million flights - as calculated by aviation safety website AirSafe.

“The Boeing 737-800 series has had an excellent safety record since the 1990s and there are thousands of this fleet around the world,” Flight Safety Foundation CEO Hassan Shahidi tells Euronews Travel.

“The unusual abrupt nosedive of the airplane from cruise altitude is very puzzling. The investigators will be looking into all aspects and it is too early to speculate about the cause of this crash.”

Locating the flight data recorder or ‘black box’, the voice data recorder, and listening to the last air traffic control communications, will be crucial pieces in uncovering what went wrong, he adds.

The incident is a devastating departure from form for China’s airlines, too. The country’s last fatal plane accident was in 2010, when 44 people were killed on approach to Yichun Airport.

In cruise mode, as MH5735 was believed to be, planes are typically on autopilot, meaning “it is very difficult to fathom what happened,” Chinese aviation expert Li Xiaojin told Reuters.

At 29,000 feet (around 8,800 metres) and nearing their destination, the pilots would have been preparing for landing. But instead the plane plunged directly down in less than two minutes, catching fire as it hit the forested hillside.

“It is very likely that the aircraft lost power at cruising altitude, resulting in the pilot losing control of the aircraft,” he said.

“This is a very serious technical failure in which the plane inevitably enters a high-speed descent.”

The Boeing 737-800 is one of the most common aircraft in the world, and considered to be one of the safest. For comparison, all models of the Airbus A300, another popular commercial aircraft, have a marginally higher crash rate of 0.46 crashes per million flights. This rises to 1.35 for the Airbus A310, according to AirSafe data.

Experts have been quick to point out the difference between the Boeing 737-800 and the Boeing 737 MAX line. The latter had all planes grounded worldwide in 2019 following two deadly crashes in Indonesia and Ethiopia.

Satisfied by changes to this riskier aircraft, the EU Aviation Safety Agency (EASA) gave its seal of approval for the MAX planes to start flying again in 2019, though they have stayed banned in China.

There have been a couple of notable 737-800 crashes in the past, however. An Ethiopian Airlines operated-plane crashed into the Mediterranean Sea in 2010, killing all 90 passengers and crew.

In response to yesterday’s incident above the Guangxi province, Boeing said that its thoughts are with the passengers and airline crew of MU5735.

“Boeing is in contact with the US National Transportation Safety Board and our technical experts are prepared to assist with the investigation led by the Civil Aviation Administration of China,” the company tweeted.

A spokeswoman for EASA told Euronews Travel that it has no information at this time that would warrant any safety actions with respect to the 737-800 in Europe. "As with all safety investigations, we are in contact with the State of Design authority of the aircraft (in this case the [US] Federal Aviation Administration) and we will be monitoring findings from the investigation closely and take any safety actions required," she added.

China Eastern has set up a hotline for people seeking information about those on board. It expressed "its deep condolences for the passengers and crew members who died."