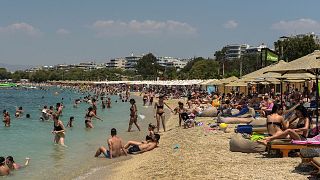 British tourists have ranked holiday destinations on value for money. This is Athens, Greece.   -   Copyright  Canva
By Charlotte Elton  •  Updated: 06/06/2022

With the cost of living crisis hitting us all, many travellers are looking for the destinations where their money will go furthest.

As well as recording tourists’ perceptions of costs abroad, the research investigated how far their money would stretch in dozens of different travel destinations.

If you want to get away without breaking the bank, here’s where to head for your next holiday.

Which holiday spot is the best value for money?

According to British holidaymakers, Spain is the best value travel destination in the world.

It topped the league table, with 92 per cent saying it offered ‘good value.’

Brits love the Spanish mainland - but they’re almost as fond of the Spanish-governed Canary Islands.

91 per cent of respondents believe this beautiful island paradise offers value for money.

Thailand, Malta, and Cyprus also made the top ten.

Not everywhere was so popular, with many destinations failing to crack the 50 per cent approval rating.

Luxurious Dubai was near the bottom of the table with 44 per cent, pipped for bottom spot by pricey Scandinavia (42 per cent).

How far will your money go?

The Post Office survey also rated 36 destinations on the cost of food, drink and essentials.

Researchers picked eight items that were ‘representative of the purchases tourists are likely to make.’

This haul included a three course evening meal for two with wine, a bottle of beer, a glass of wine, a can of Coca-Cola, a large bottle of still water, a cup of coffee, suncream and insect repellent.

In Port city Marmaris, Turkey, or Sunny Beach, Bulgaria, the list of goodies would set you back a mere €30.5.

Despite Spain’s high approval rate amongst tourists, costs quickly rack up. In Costa del Sol, the same eight items will cost €71. In the Canary Islands’ Lanzarote, they will cost €84.

All this pales in comparison to pricey Reykjavik in Iceland, where the haul would set you back a mammoth €186.

Why is this research important?

Post Office researchers urged holidaymakers to do their research before heading abroad.

“It will pay dividends to invest time in holiday homework because many people won’t have travelled abroad in the past two years,” said Nick Boden, Head of Post Office Travel Money.

“They need to be aware that prices have risen sharply in some destinations and fallen significantly in others.

“We advise making a destination shortlist and comparing costs before booking a trip.”

Prices have fallen by more than a third in Marmaris compared to this time last year, fuelled by the collapse of the Turkish Lira. Prices have also dropped by 15 per cent year-on-year in Greece.

Compared to pre-COVID9 prices, costs have shifted even more dramatically.

“Compared with March 2020 when the first lockdown was announced and travel to most countries was barred, Post Office research found that prices are lower now in two-thirds of destinations – with the biggest drop of over 50 per cent in Costa Rica,” researchers claim.