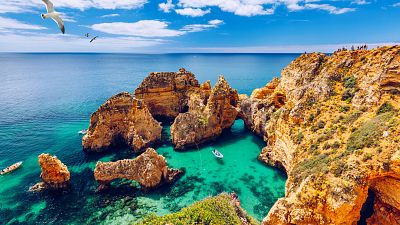 School's out: the Algarve in Portugal is one stunning and affordable destination this half-term.   -   Copyright  Liubomir Paut/Getty
By Lottie Limb  •  Updated: 19/11/2021

Many UK families are ditching a drizzly British October for warmer climes this week.

School half-term starts on Friday 22nd October and runs until 1st November, so there’s plenty of time for an autumn break.

For those looking to book a last minute break, a new survey has revealed the European locations which offer best value for money.

The promisingly named Sunny Beach in Bulgaria tops the list from the Post Office Travel Money’s 2021 report. But there’s good news for holidaymakers everywhere , as prices in the world’s most popular resorts and cities have dropped for the fourth year running.

The Post Office has added up the common costs involved for tourists abroad - including dinner for two with wine, a number of soft and alcoholic drinks, sunscreen and insect repellent.

Turkey is also top of the pile, followed by Portugal’s ever-popular Algarve, while Bali was found to be the best-value long-haul destination. By a different metric, Spain is the half-term destination with the highest airline seat capacity.

Here are seven of the most cheap and cheerful European breaks to satisfy your autumn wanderlust.

If it’s an excellent resort you’re after, Bulgaria will give you the best beach for your buck.

Located on the Balkan’s Black Sea coast, the holiday resort of Sunny Beach is known for its water sports, nightlife, and long golden sands.

The total cost of eight key tourist items - including dinner, drinks and other essentials - is only £27.71.

The large resort of Marmaris is a celebrated spot for sun-seekers. And with Turkey dropping the requirement for fully-vaccinated travellers to present a negative COVID-19 test on arrival, getting there just got easier.

The port city has plenty of bathing spots and a host of restaurants to choose from. They won’t set you back too much either, with the average cost of a meal for two plus wine costing £24.91 according to the Post Office’s calculations.

With the Atlantic on two sides and wild waves guaranteed, it’s a particular draw for surfers. And birdwatchers have their pick of lagoons to watch the area’s amazing avifauna, at the protected Parque Natural da Ria Formosa.

But any holidaymaker would be wise to consider the Algarve, as the combined holiday items cost only £44.13.

But any holidaymaker would be wise to consider the Algarve, as the combined holiday items cost only £44.13.

Landlocked Prague won’t be your first choice if you’re prioritising sun and sea, but the capital certainly offers plenty of colour in its old town, and a fascinating history. And at fourth place on the holiday costs barometer, wandering its fine streets won’t set you back too much.

It was Boris Johnson’s destination of choice last week. The Prime Minister’s visit to Marbella has been described as “the best confidence vote we could have” by the president of Costa del Sol tourism Francsico Salado.

Plenty more Brits will be flying to Spain’s southern coastline, to bask in the warmer weather and turquoise waters of the Mediterranean Sea.

Funchal is the capital city of the beautiful Madeira archipelago, an autonomous region of Portugal which is actually closer to the Moroccan coast.

Funchal is the capital city of the beautiful Madeira archipelago, an autonomous region of Portugal which is actually closer to the Moroccan coast. Balmy weather is pretty much guaranteed by the island’s subtropical climate, so it’s not hard to see why tourists are travelling to the outer edge of Europe this October.

Once you get there, there’s plenty to do in the populous city of Funchal - from climbing the hills to inspecting the famous Madeira wine cellars.

Paphos is a great destination for families this half term, offering gorgeous beaches and bays for swimming together. And it’s not just another sea and sand destination; the area has been inhabited since the Neolithic period so there’s tonnes of local history to soak up too.

Legend has it that the goddess of beauty Aphrodite was born here, and the whole of Paphos is a UNESCO world heritage site.

Is this the most over the top Christmas house in Europe?