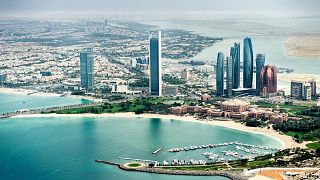 The next year alone will see NBA giants, English Premier League footballers and the who’s who of the art world descend on the emirate for a string of high-profile events.

But for tourists visiting the UAE, the glitz and glamour is just one part of the picture. Packed with mega-museums, opulent Islamic architecture and an abundance of nature, there are endless ways to experience the wonders of Abu Dhabi.

At the 2022 Arabian Travel Market in neighbouring Dubai, Abu Dhabi’s Department of Culture and Tourism (DCT) announced a string of new initiatives which they hope will boost visitor numbers to 23 million a year by 2030.

“We want to preserve the premium experience - enjoying the beach, the culture and the beautiful nature - and build on that to grow our tourism sustainably,” says Acting Director of Travel Trade and Market Development at DTC, Husain AlHashmi.

“It’s been a big week of announcements and there’s more to come in the next few months.”

The Saadiyat Vision and the island’s cultural gems

With its white sand beaches, glistening waters and vibrant gastronomy, it’s very easy to fall in love with Saadiyat Island. But there’s plenty of substance beneath the shiny surface too.

“We believe that Saadiyat is one of the best beach experiences in the region,” says AlHashmi. “The hotels there also offer a premium product and the cultural district is unique.”

Once finished, Saadiyat Cultural District will be one of the most densely packed, globally-relevant cultural centres in the world

Once finished, Saadiyat Cultural District will be one of the most densely packed, globally-relevant cultural centres in the world, with Guggenheim Abu Dhabi, Zayed National Museum, Natural History Museum and the Abrahamic Family House joining the Louvre, which opened in 2017.

In the meantime, culture lovers should make a beeline for the blinding white of Abu Dhabi’s Sheikh Zayed Grand Mosque or delve into the region’s history at the city’s oldest standing structure Qasr Al Hosn.

Summer in Abu Dhabi is typically a quieter affair, but that looks to change with the introduction of the Summer Like You Mean It campaign, inspiring tourists to visit the capital this season.

The campaign includes promoting indoor activities such as swimming with sharks at the National Aquarium, yoga at the Louvre Abu Dhabi and hotel promotions that will slash prices by up to 30 per cent.

Also featured is the Abu Dhabi Summer Pass, which will allow access to exclusive offers across some of the city’s biggest attractions, including access to Warner Bros World Abu Dhabi and Yas Waterworld Abu Dhabi.

What should you eat in Abu Dhabi?

The restaurant scene in Abu Dhabi is diverse, with everything from local bites to fine dining to tantalise your tasetbuds.

In 2022, Abu Dhabi hosted MENA’s 50 Best Restaurants, with Hakkasan, Coya and Butcher & Still restaurants appearing on the esteemed list. This year also saw an expansion of the Emirati Cuisine Programme, a government initiative which introduces authentic Emirati dishes to the city’s best menus.

“Food has been one of our major focuses over the last two years and we’re excited to continue expanding the culinary scene,” says AlHashmi.

“We’re proud to offer world-class restaurants and brands alongside local dishes that have been passed down through generations.”

What is the best way to see nature?

Just steps away from the bustle of the city lies one of AlHashmi’s top recommendations for nature lovers.

The sprawling Mangrove National Park is a haven for birdwatchers and wildlife photographers looking to escape into the wild for an hour or two.

The sprawling Mangrove National Park is a haven for birdwatchers and wildlife photographers looking to escape into the wild for an hour or two.

The mangroves are free to visit and the idyllic reserve is one of the UAE’s most important ecological assets, protected by the Environment Agency Abu Dhabi.

Keep your eyes peeled for flamingos, herons, turtles, dolphins and scuttling crabs as you explore the waterways of the biodiversity hotspot by kayak.

If you want to get up close and personal with Abu Dhabi’s feathery residents, then a trip to the Abu Dhabi Falcon Hospital will give you a further glimpse into traditional Gulf culture.

From tearing through the dunes at hair-raising speeds to screaming your head off on the world’s fastest roller coaster, Abu Dhabi has enough distractions to appease even the biggest thrill seekers.

Off-road desert driving with a night or two under the stars expertly blends modern-day thrills with a nod to the Bedouin culture. Back inland, Yas Island should be top of the list for theme parks and water parks, including Ferrari World Abu Dhabi.