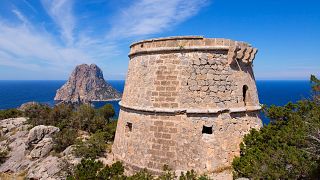 The campaign to tackle rowdy revellers by local political party Podemos has gained traction as Spain’s Balearic Islands seek to distance themselves from drunken party tourism.

Local authorities are determined to focus on a more sustainable future for both visitors and island residents, which could include clamping down on outdoor discos that affect local communities.

In January 2022 the government approved new laws that require all tourism businesses to implement a series of sustainability measures.

Under these new laws, the Balearic Islands - which encompass Ibiza, Mallorca, Menorca and Formentera - are collectively aiming to become the first circular destination in the world. This will involve a tourism model that tackles issues such as waste, pollution and climate change by promoting sharing economies, reuse and recycling.

The government is investing €55 million to implement its new sustainability plans.

How is Ibiza encouraging green tourism?

The new sustainability measures will tackle issues such as nutrition, water use, waste, and clean energy.

Tourist venues in Ibiza will now be required to measure their water consumption. The installation of water-saving devices on washbasins, baths and showers will be made compulsory and businesses are being asked to look at using rainwater in their operations.

The Balearics Waste Law also came into effect in March, banning the sale and distribution of various forms of single-use plastics across the islands. Now, tourism businesses will be banned from using single-use plastics in bathrooms. Paper must also be removed and will be replaced by QR codes.

Tourism businesses will also have to remove oil heating in favour of natural gas or electric, with a view to emitting 57,600 kilos of CO2 less per establishment each year – the equivalent emissions of 7.3 homes over the same period. And they’ll be asked to control building temperatures including in staff areas, especially in the kitchens.

Restaurants will be required to trace where their Balearic fish and seafood is coming from with the use of endangered species in the kitchen outlawed.

What is there to do on Ibiza besides clubbing?

Repeat Ibiza visitors know that the island is far more than the sum of its nightclubs and beach bars anyway.

In around 650 BC, the Phoenicians believed the island was blessed by the gods and claimed its soil was sacred. Fast forward two millennia and this mystical allure has helped the new age movement take root on Ibiza.

‘Hippy markets’, often with a backdrop of bands and DJs, draw families and alternative travellers. But some have also become meeting places for local residents.

The year-round weekly Sunday market in the northerly village of San Juan takes place in the picturesque main square and is loved for its live bands and good food.

The Punta Arabí market in Es Caná is the oldest and biggest, dating to the 1970s. Las Dalias in San Carlos has inviting seating and afternoon DJs spinning tunes for everyone to enjoy.

And if the new age movement on Ibiza has a homeland, it’s the island of Es Vedra just off the southwest shore. Legend has it that this is the third most magnetic place on earth.

At dusk, the coastal headland looking out towards the rocky island monolith comes alive with drumming and fire dancers hoping to soak up its magical allure.

Active holidays have also become more popular in Ibiza in the past few years, providing a pathway to move tourists away from beachfront resorts and back into island nature.

Trail running has also taken off, with Running Ibiza offering private guided runs, plus group socials from October to May.

The Ibizan table: from farm to fork

Eco-farm retreats are another alternative to Ibiza’s beach clubs that have surged in popularity in recent years. Agriculture is a mainstay of the island’s economy, with local crops including olives, almonds and citrus fruits finding their way onto many rural restaurant menus.

Properties like Design Hotel’s farmhouse La Granja, which grows its own crops in a fertile 10-hectare plot near Buscastell, operate as full board with a farm-to-table philosophy.

At Atzaró Agroturismo, fresh ingredients for the hotel restaurant are picked daily from the on-site organic garden. The hotel is part of the global KM0 scheme, which involves a commitment to providing sustainable meals for guests by sourcing food as close to home as possible.

What is Ibiza’s sustainability tax used for?

Although the Balearics’ new sustainability legislation is the biggest driver of change, the islands have been working towards a greener future for several years now.

In 2016 they introduced a Sustainable Tourism Tax, which varies from €0.50 to €4 per person per day. It applies to everyone over the age of 16 and the cost depends on the time of year and level of tourist accommodation.

The tax is designed to help protect the islands’ natural resources. Last year alone, it raised €24.5 million and enabled 46 sustainable projects to be completed.

This year, the tourist tax is helping to fund underwater mapping of the Posidonia Oceanica, a type of seagrass found around Ibiza and Formentera. It creates unique marine biodiversity and acts as an important source of oxygen.

Once mapped, an app will be produced to indicate protective no-anchorage zones for sailors around the islands.