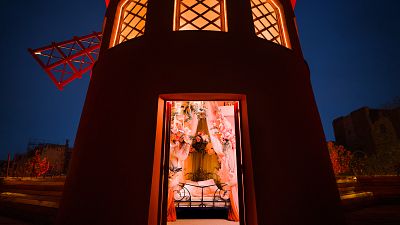 A few lucky guests will be able to stay overnight in the Moulin Rouge windmill this summer.   -   Copyright  DAH/Airbnb
By Lottie Limb  •  Updated: 05/05/2022

As travellers, we all look for places that speak to us personally. Whether historical curiosities are your bag or biodiversity hotspots, the world is wired in unique ways for all of us.

Accommodation is usually just the backdrop as we go off in pursuit of adventure, culture or wildlife. Even for those of us who like our creature comforts, a hotel or homestay is rarely the thing a holiday revolves around.

But with star locations like the Moulin Rouge windmill becoming available on Airbnb, there’s a growing trend for making your bedroom centre stage.

There’s no doubt that staying on the set of your favourite TV show or film carries a real thrill. And from Villanelle’s Barcelona apartment to an Italian villa and lakeside cabin, there’s something for everyone among these eight amazing properties.

For the first time ever, the legendary Parisian landmark will be open to guests this June.

Remarkably, a night inside the red windmill - decked out in spectacular Belle Epoque style - will only set you back €1. Competition will be fierce, however, as only three nights are available through Airbnb.

In all honesty, we’re not sure if Nicole Kidman has actually set foot in Montmartre’s inner sanctum. But it’s clearly at the heart of the 2001 film, and is ‘the birthplace of the French Cancan’ to boot.

Killing Eve may be gone from our screens for good, but the stylish attire and abodes of antihero Villanelle still live rent-free in our heads.

In the third and penultimate series, Jodie Comer’s assassin had a gorgeous Barcelona flat at her disposal. And if the Art Nouveau abode took your fancy then it could be yours for a few nights too.

Named Architects’ Flat on Airbnb, the two-bed flat in the Gràcia neighbourhood is just a stone’s throw from Caca Vicens and plenty of other modernist treasures.

Italy’s Lake Como already has plenty of star power - a favourite summer destination among the likes of Amal and George Clooney.

But now there’s a place to really live out your A-list dream, as the villa from House of Gucci - starring Lady Gaga, Adam Driver and Al Pacino - is available to hire.

Villa Balbiano on the lake’s western shore is described as “an awe-inspiring Italian jewel”. There’s no understatement in this six-bed mansion, with its opulent beds, boathouse, chandeliers and outdoor swimming pool. Possibly one to book with friends to avoid breaking the bank.

Another Italian villa that looms large in the popular consciousness is that which featured in the BBC’s Normal People.

It might have been a fleeting change of scene in the scheme of Sally Rooney’s brilliant novel, but the rustic ‘Farmhouse’ captured viewers’ hearts. Tenuta di Verzano provides the perfect vantage point to look out over the Roman countryside (best of all you can enjoy the view from the pool).

It sleeps six, so would also be a great one to organise with friends (who hopefully get on better than Marianne and Connell’s crew).

It’s not possible to camp out at Harry Potter World in Watford. So your next best bet is booking a stay at De Vere House in Suffolk.

Used on the set of Godric’s Hollow, the village of Lavenham has plenty of its own charm as one of the UK’s finest medieval villages, with hundreds of protected heritage properties.

With its old, wonky exterior, this house is located right at the centre, and boasts two five-star rated bed and breakfast rooms with beautiful four-poster beds.

Another golden oldie but an exciting option for the enduring Twilight fan in your life is this Oregon home where Charlie and Bella Swan lived in the first film.

Perched in downtown St Helens, the 1930s’ Twilight Swan House offers a quiet base from which to explore neighbouring Portland.

You’ll need to book well in advance though, as it’s currently full for the next year.

2. Lakeside cabin from the Avengers

If you’re after a more rural getaway, this lakeside cabin in Georgia could be just the ticket. It has multiple movie credentials, most notably as the place where Tony Stark retires to in Avengers: Endgame.

A hit with Marvel fans of all ages according to the Airbnb reviews, there are plenty of outdoorsy activities to get stuck into - from fishing to horse shows or simply roasting marshmallows around the fire pit.

And finally, if you're wanting to go all out with a luxury retreat Down Under, you can do so on the set of Nine Perfect Strangers.

Set within 22 acres of lush bamboo forest in Byron’s Bay, Soma is a remarkable place for 16 people to unwind. Guests can enjoy group practice in the geodesic yoga dome and make the most of the infinity pool and countless other amenities.

Sustainable living is made easy at these gorgeous eco stays

Inside the invisible holiday home that mirrors the Californian desert