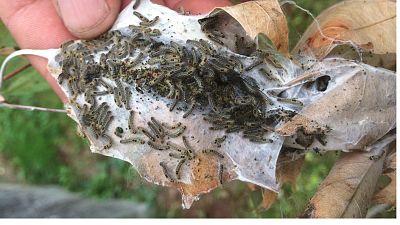 Caterpillars with hair that can prove toxic to both humans and dogs have been spotted at beaches and beauty spots across the UK.

As the weather warms up, clumps of brown-tail moth caterpillars cluster together inside a spider-like web woven as a winter nest by the larvae. But the hairs on the caterpillars can irritate skin and trigger breathing problems like asthma if inhaled.

First spotted in Bournemouth, Boscombe and Christchurch in Dorset over the Easter weekend, this week caterpillars were sighted on paths close to Jaywick Sands in Essex.

Dog owners have been warned to be vigilant as the toxins released by the caterpillars can prove fatal to canines if ingested.

Anyone who suspects their pet has come into contact with a caterpillar or even eaten one should contact their vet for advice.

What should you do if you spot the caterpillars?

Bournemouth, Christchurch and Poole Council says the caterpillars can be reported to the seafront team if they are spotted near the beach.

But a spokesperson adds: "Brown-tail moth caterpillars are a native species and one of the common prey items of the cuckoo. Members of the public are advised not to touch the caterpillars as their hairs can be a skin irritant.”

Councils will take different approaches depending on where the caterpillars are found, how many there are and how much of a hazard they might pose to humans and animals.

The spokesperson says: "The caterpillars can be left undisturbed, and a sign may be placed to warn people to not touch, or in rare cases the caterpillars are destroyed."

The caterpillars are brown, have a white dotted line down each side, and have two red dots on the back of their tail, making them easily distinguishable.

They are usually found mostly in Southern England and Wales and in some coastal regions further north.

Are there more sightings of brown-tail moth caterpillars now?

Warmer autumn temperatures allow the larvae to get fatter before they hibernate for the winter, according to Eleanor Groden, professor emerita of entomology at University of Maine.

A recent study published in journal Environmental Entomology highlighted that this gives them a better survival rate and means more caterpillars, come the spring.

It seems likely that more outbreaks will be spotted along the coast and inland as we head towards summer.