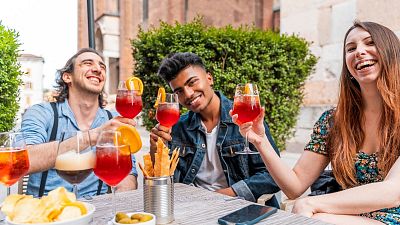 Now that travel restrictions are easing and COVID is starting to feel like a thing of the past, we’re all dying to get out in the world again.

The world is calling and there are so many cultures to immerse yourself in, let alone the cuisine to discover and the beaches to forget your worries on.

The only problem is - travelling is expensive. That means more and more of us are opting to be a “working traveller” so that we can make money while gaining new experiences all over the globe.

Writing and blogging are good sources of remote income, if you’re that way inclined, or even online tutoring if you have a specific subject you can focus on. But if you want to work somewhere in a more hands-on way, we’ve got some great, up-to-date recommendations of where to go and what to do, provided by the Jobs Abroad Bulletin.

From leading activities at a summer camp in Europe to fruit picking in Morocco, there are so many options to choose from.

These are the jobs being recruited for now.

Summer camp season in Europe is nearly upon us with some vacancies still to be filled. The high season is June and July but some positions will begin a month earlier and end a few weeks later.

Roles can be split into three: English teaching, activity instruction and background positions. Whatever your role, the main task will be maintaining a safe environment for the children and young adults in your care while making learning English fun.

Just bear in mind, since the UK’s departure from the EU, most of these organisations have adapted their recruitment requirements from native English speakers to close to native speaker level.

Village Camps take place for a month or so this summer in Switzerland, Austria and Portugal. Vacancies, aside from activity instruction, include camp photographer and lifeguard.

Positions in Switzerland are available to holders of passports from New Zealand, the USA, Canada and the UK.

This company mostly recruits North Americans tasked with recreating an American camp environment and making it fun to speak in American English from the moment the campers arrive.

Camp counselling, childcare or teaching experience is required but not the ability to speak French.

This is a family business founded in 1980 in the small town of Vallclara, on the Costa Blanca. Since then they have been growing, incorporating new camps and, most importantly, more staff.

Along with native English teachers they take on monitors, which is a bit of an easier role, who should have a high level of English.

These tutors travel around the country from camp to camp after a three-day training on the Adriatic coast of Italy. Their camp programme revolves around the ethos of ‘edutainment’, where activities, games, songs, dancing, acting and performance go hand in hand with learning English.

Alpadia runs English camps in eight varied locations, from the banks of the Seine to the Alps, from mid-April to mid-August. They also run German and French language camps.

These camps are held in youth hostels in Bavaria, where English instruction is combined with rock climbing and film projects. English speaking instructors teach the language in an interactive and fun way.

They are also looking for inspirational and creative outdoor instructors to join the team for the 2022 season.

Fokus is seeking people passionate about language, sports and nature. The team are looking to fill English camp counsellor and leader positions in their camps in Chiemsee, Bodensee, Amersee, and Berchtesgaden.

Altitude tends to begin recruiting around now for mountain adventure and sports leaders, language teachers, pastoral leaders, duty managers and chefs for their camps in Verbier.

The Village holds its summer camps in a hotel resort and sports campus, ten minutes from the beach. Here an international group of coaches have the opportunity to work in Spain for four weeks in July.

Most tutors working here are university students from English speaking countries. You need to be over 18, outgoing, organised, energetic and responsible and preferably able to stay the whole summer, from June to August. All meals, accommodation and transport between camps are provided.

Smaller camps around Europe often require a niche skillset such as gardening, but there are still a lot of English speaking roles up for grabs.

As a native speaker, your job will be to talk for the majority of the day in many different forms from one-on-one conversations, group activities, workshops, games to relaxing over a meal or a drink. For every two Polish participants there is one native English speaker.

Help at home and in the summer camp in Algeciras, Spain

This company organises a summer camp on a farm close to their house. They need someone for the whole of July - and duties also involve sporadically looking after their daughter at home.

Looking for help with our summer camp in North Italy

These guys organise a summer camp every summer, where they need English speakers to help with creative activities and games.

This Lithuanian company seeks native or near-native level English speakers that love nature and think teenagers are more interesting than annoying. They’ll pay €80 pocket money per week along with food and accommodation.

Children need pretty much everything done for them, require constant attention and have the attention span of a flea.

So if you have some experience in keeping them safe, happy or occupied then you are guaranteed to find parents willing to entrust their kids to you in both Europe and the US.

Taking on an au pair job is a good way to experience a foreign culture and learn a language. The job is seen as a cultural exchange rather than a good wage earner. An au pair in Europe can expect about €95 to 143 a week, living as a member of the family, depending on which country they work in.

British au pairs working in Europe can do so for up to 90 days on the Schengen tourist visa.

For European au pairs looking to be placed in other EU countries, nothing much has changed.

Au Pair in the USA

The USA has a long-standing au pair programme. Here, you should be an 18 to 26 year old, non-smoking driver with childcare experience to qualify for the Au Pair in America scheme. Childcare International is another agency that can arrange placements in America.

Earnings are around $200 (€182) per week, living with a family, return flight and insurance. In return, you put in 45 hours of childcare and light household duties.

Au Pairing in the UK

Since the UK chose to leave the EU, things have become decidedly different for au pairs from Europe. Though there was some optimism little would change, once the transition period ended agencies have reported incoming business is virtually non-existent.

Other nationals can work as an au pair in the UK on the Tier 5 Youth Mobility Scheme visa, but most choose to work in other sectors.

Mark Warner is a good bet for employment in the summer. TUI recruits both qualified and unqualified kids reps both locally and to work abroad.

Try Sunsail for nanny or nursing jobs on yachts in the eastern Med, Canvas Holidays, Club Med, and Eurocamp for a position as a children’s courier. A European language is usually essential and the wages for these posts are generally not great but compensated by a fun social life.

After a couple of summers of disruption, music festivals are back. One way to jump the long queues is by volunteering and working your way at a festival.

Each of the hundreds of festivals that take place each year in Europe and the USA requires a huge amount of organisation and many are willing to offer free tickets, separate staff campsite facilities and other perks to those wishing to lend a hand.

For example, the Glastonbury website suggests that volunteers are normally required to work three eight hour shifts to earn their tickets.

While some restrict volunteering to the local community, many open up their roles to volunteers from further away, including from abroad, though visa restrictions may apply.

Stewarding and the post-festival clean up operation

This is a great option if you want to enjoy the festival itself and not get to work until after it’s over.

This is also in the remit of outside contractors and is either paid or offered in exchange for your ticket. Roles behind the bar are often very fun and sociable - plus you can see the bands play from where you’re based, so you don’t miss any of the music.

Campaigning is another way to get involved. Many environmental and other lobbying groups use the large festival crowds for direct or indirect fundraising - or to get across their message. .

Here are a few other roles to consider too:

Here are the best European music festivals to apply for either paid work at or work in exchange for a free ticket:

These global help exchanges range from stately homes to alternative living - and are all for green-fingered volunteers.

Europe still has little to offer those looking to fruit pick for the next couple of months, but in Australia, it's business as usual in fields and farms.

In Queensland, bananas are grown all year in Cardwell and Innisfail, while the Sunshine Coast can provide harvest nuts for a month or so. Bundaberg and Childers are two particularly fertile areas of the state with work available picking tomatoes, cucumbers and citrus for the next four to five months.

In New South Wales, try apples in Batlow and bananas, in Coffs Harbour. In Victoria, Red Hill and Main Ridge are good for apple picking.

Riverland and Adelaide Hills, in South Australia, still have a month or so left of bringing in apples, pears, grapes and peaches. Across to Western Australia, jobs may be picked up in the apple and pear orchards surrounding Pemberton, Bridgetown, and Donnybrook. Otherwise try Geraldton, for rock lobster, or Merredin and Northam for oats and barley.

Prawning and scalloping work may be possible in Carnarvon until October. Travellers in Tasmania should visit the Huon Valley, Tasman Peninsula and West Tamar for apples and pears. Or head for Scottsdale, New Norfolk and Devonport for hops picking around the middle of March.

Australia Backpackers Guide provides addresses of 400 farms on a map while current fruit picking jobs are advertised on the Backpacker Job Board.