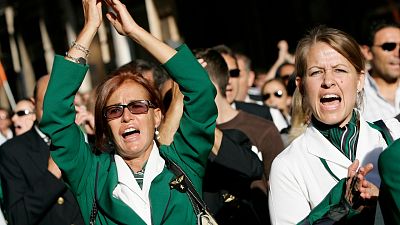 The last scheduled flight was a return trip from Cagliari to Rome, which landed shortly after 11pm on Thursday 14th October.

Alitalia has been in debt for more than a decade and went into special administration in 2017, with bankruptcy following soon after.

The airline has been replaced by a new national carrier, ITA, which received €1.35 billion of government funding to complete the takeover.

This decision was met with outrage however, after it was disclosed that ITA would hire only 3,000 of the estimated 10,000 Alitalia employees.

Union officials say those working for ITA are being paid significantly less.

Flight attendants strip off in protest

In the weeks before Alitalia ceased to exist, workers staged strikes and protests denouncing their treatment.

And for many, the battle is far from over.

"We are here to express first of all our pain and also the solidarity for all our colleagues who were forced to sign a humiliating contract," says Cristina Poggesi, one of many flight attendants who protested in Rome this week.

The former Alitalia employees stripped off their old uniforms in opposition to the takeover.

Standing in rows atop Capitoline Hill, the women lowered their shoulder bags to the cobblestone pavement, before slowly removing their jackets, skirts, and high-heeled shoes.

Wearing only their undergarments, they shouted "We are Alitalia!" in unison.

The former employees intend to pressure the Italian government into extending unemployment benefits for as long as five years.

Critics of ITA have cast doubt on the viability of the new airline.

They say its size, workforce and fleet are designed to make it attractive to foreign airlines, in a bid to secure a takeover deal.

Among its routes, ITA plans to operate flights to New York, Tokyo, Boston and Miami from Rome and Milan.