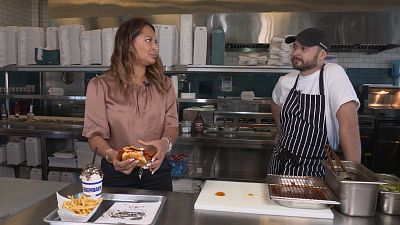 In just three years, homegrown burger outlet Pickl has dominated the fresh fast food scene across Dubai with their fried chicken Sando's. As they open their eighth outlet, in this episode of Taste Euronews' Natalie Lindo meets the founder to discover the secret recipe behind their success.

In a city full of burger joints what does it take to become a runaway success with queues that spill out onto the streets?

For Dubai homegrown outlet Pickl the answer is simple. In fact, 'simple, not basic' is the company's motto.

CEO and founder Steve Flawith launched the first outlet in the busy residential area of Jumeirah Lakes Towers (JLT) in 2019. He had previously worked in fine-dining restaurants and wanted to bring that high-quality fresh produce concept to a fast-food environment.

Three years and eight branches later and Pickl is synonymous with chicken ‘sandos’ and beef burgers, and now even boasts a burger meat-free menu.

The aim for Steve and his team was to offer a fresher quality product at a lower, affordable price point. Cheeseburgers start at 30AED, the equivalent of €7.20.

From the meat patties to the pickles and sauces everything is made in house, with produce from local suppliers used where possible.

Steve says that replicating quality in every branch has been key to Pickl’s success,

“Everything we do is cooked fresh to order. The chicken is hormone and antibiotic-free. We make everything ourselves. It's all our own recipes.”

The idea is, that it is fresh fast food. So everything we do is cooked fresh to order. We make everything ourselves. It's all our own recipes.

The 'simple, not basic' approach is carried through from the quality of the ingredients to the vibe in the store, with the most famous burger being the Spicy Nashville Chicken Sando.

When it comes to the red hot but adjustable burger, Steve added that it is all about the quality of the chicken.

“We brine it om liquid overnight, dry it off and then we flip it into our flour mix.”

What is in the flour mix remains a secret blend of thirteen different spices. After this process, the chicken is placed in buttermilk before being coated in the flour mix for a second time. This creates the coating for the chicken and gives it its signature crunch which happens after five minutes in the fryer.

The Nashville sando goes through two further flavour stages. First, they dip it into an oil spice mix and then it is drained and coated in a dry spice mix.

“We use 12 different spices. We get the chillies in fresh. We dry them out for 72 hours and then we grind them down to kind of different levels. So you got this amazing red juicy chicken,” Steve says.

Given the name Pickl – it goes without saying every burger comes with in-house speciality pickles – another secret recipe that revolves around 12 ingredients.

It is this attention to detail and approach in each and every burger that has led to customers coming back for more.

Steve points out that ultimately the goal was to not just make good burgers but to make Pickl a homegrown burger concept that Dubai could be proud of, not just regionally but internationally, something that is reflected in their plans to franchise globally.

Summing up, Steve says: “The F&B dining scene here is incredible... we felt there was a gap in the market that was about creating amazing food, but also creating a lifestyle brand and how we could extend that into people's homes.”