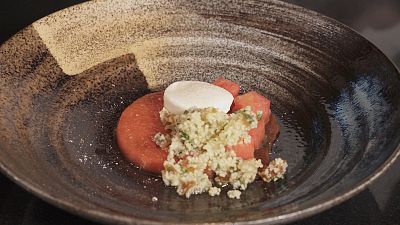 Euronews joined Chef Jessica Préalpato in the kitchen at Brasserie Boulud at the Sofitel Obelisk as she visited Dubai in preparation for Expo 2020. The award-winning chef was appointed as an Ambassador for the French Pavilion. This is not the first title in which her culinary skills have been recognised. In 2019 the French chef was named 'The World's Best Pastry Chef' at the World's 50 Best Restaurant Awards.

Following her parents' footsteps, who had a bakery and pastry shop, Préalpato studied at the renowned Hotel School of Biarritz. Currently, she is the Pastry Chef at the three Michelin Star, Alain Ducasse restaurant in the Plaza Athénée. Her style of cooking falls in line with chef Alain Ducasse's concept of "naturalité". This approach promotes healthy eating by maintaining the element of naturalness in taste. For dishes traditionally loaded with sugars, she opts for strawberries and honey for their natural sweeteners.

Préalpato speaks passionately about local produce and producers, saying, "they are great people, and we need to help them". Aligned with the theme of Expo 2020, her cooking style promotes sustainability and eco-friendly ingredients. Combining seasonal fruits with locally sourced ingredients is one way in which she achieves this.

The inspiration for her dessert, which will be available at the French Pavillion, was Dubai's hot climate. She wanted to create a dish that is cool and refreshing to combat Dubai's hot temperatures. She spoke highly about the range of local dates available in the region. Préalpato utilised these dates in her recipe to add sweetness because her well-defined palette recognised the difference between French and Emirati watermelons.

With five months to go until Expo 2020, Préalpato explains that this dish is very likely to change from this first edition. She hinted at replacing the watermelon with another fruit that is consistently the same when served in large numbers. She explains, "In France when I do dessert, I need a lot of time. I need three weeks to one month to create a dessert that all the people like".