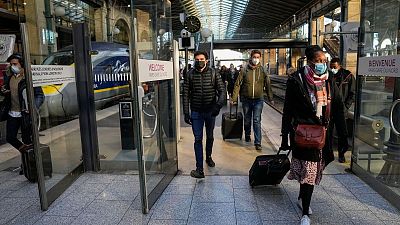 From next week, all travellers to the Schengen Area need to check if their vaccination is valid.   -   Copyright  AP Photo/Michel Euler
By Lottie Limb  •  Updated: 28/01/2022

Keeping up with travel rules has added another layer of complication to life since the pandemic struck. Even if you’ve been lucky enough to get abroad in the last year, the administrative geography has almost certainly changed since your last holiday.

Crucially, Brits travelling to popular European destinations like Spain and France for half-term should know that the definition of “fully vaccinated” is not the same as it used to be. From 1 February, EU countries are setting an expiry date of nine months on vaccine passports.

The move, adopted by the EU Commission last month, is intended to unify travel restrictions in the Schengen Zone, simplifying journeys for both citizens and tourists.

Though the new rules don’t affect entry to the EU, the vaccine certificates are needed to get into most venues you'll want to visit while travelling on holiday or for business. An out-of-date pass will severely limit what you can do.

So if you received your second dose of the vaccine more than 270 days ago (around early May) a booster shot is required to restore your vaccinated status.

Does your NHS app show your boosted status?

With the huge roll-out of booster jabs in the UK over the last couple of months, most Britons have topped up their immunity in time to travel.

But a glitch in the NHS app is complicating things further. There have been reports of people’s booster doses not appearing, meaning they cannot transfer the QR code they need for EU countries’ vaccine passport apps.

A Vaccine Data Resolution Service (VDRS) has been set up to deal with these cases, but it’s currently facing high demand. So it’s important to check your NHS app status in good time, and have all the details you need if there is a problem.

Despite a lack of warning on the UK government’s foreign travel advice web pages, the new nine-month rule is legally-binding.

Some countries have gone further in shortening the validity of vaccine passes. Greece has brought the time limit down to seven months for all ages, while Latvia has set it at five months for those who had a single-dose vaccine.

In time for its ski season peak, Austria announced in late December that all tourists must now show proof of a booster dose too. Iceland was one step ahead of its neighbours in bringing the nine-month rule in on 15 January.

Even within countries, there may be some inconsistency in how often the passes are actually checked at public venues like bars and cinemas, but it's clear that getting boosted is the safest bet.

Why do we need booster jabs, and why are they valid for 9 months?

Virologists have explained that booster shots give the immune system “a richer knowledge and understanding of the virus.”

The nine-month period is based on the guidance of the European Centre for Disease Prevention and Control (ECDC), which says that booster doses should be given six months after the second vaccine, at the latest.

Announcing its decision on December 21, the EC said “The certificate will remain valid for a grace period of an additional three months beyond those six months to ensure that national vaccination campaigns can adjust and citizens will have access to booster doses.”

The mass roll-out of booster doses has been hailed as a success story in the UK. But concerns have been raised by the World Health Organisation that richer nations risk prolonging the pandemic by focussing on boosting their own populations ahead of addressing the “profound inequity in global vaccine access.”