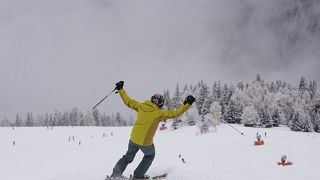 Italian skiers finally returned to the slopes after nearly two years on Saturday since the first pandemic lockdown in March 2020.

But just as the industry is poised to recover from a lost 2020-2021 season after an abrupt closure the previous year, a spike in cases in the Alpine province bordering Austria is underlining just how precarious the situation remains.

As if on cue, snow fell overnight, blanketing the slopes of Plan de Corones in South Tyrolean town of San Vigilio di Marebbe, giving a fresh covering to the man-made base just in time for opening day.

Skiers came from as far away as Croatia and the Italian capital Rome, as well as from neighbouring valleys where slopes have yet to open.

"I have shivers up and down my spine, because we left the slopes on the famous March 8 of 2020, rushing to Rome because everything was going into lockdown," said Monica Meloni, 53, of Rome, as snow continued to fall.

Government regulations require a health pass to access areas with closed lifts, which can be obtained with proof of vaccination, having recovered from the virus or a negative test in the last 24 hours. The new system launches on Saturday in the first two ski areas to open.

Here's the situation for the rest of Europe.

Switzerland, which kept its ski slopes open last year, is sticking to its plans again this year. The season has started in pockets that have gotten patches of early snowfall, though it’s not expected to switch into full gear before mid-December.

Last year, restaurants were closed because of the pandemic. They’ve since reopened, but patrons must show their COVID passes. Skiers won’t have to show the passes to get onto ski lifts but will be required to wear masks on them.

The Swiss are expecting more foreign visitors. A year ago the numbers were kept down by testing and quarantine requirements for people returning to other countries. The question mark: Coronavirus cases have been on a sharp rise in recent weeks in the country, and Swiss tourism officials admit things could change from one day to the next depending on the government’s response.

The 250 French ski areas now have a plan for reopening after the write-off of last season, with French resorts already planning to operate again in coming weeks. Val Thorens, Europe’s highest winter sport resort, became the first of France’s Alpine areas to allow skiers back on Nov. 20.

In resorts, wearing a mask will be compulsory for those aged 11 or above in all ski lifts and lines. Only surface lifts and conveyor belts are exempted from mask-wearing rules, provided they are used by a single person. Social distancing measures must also be respected in lines or among people traveling in groups.

The French Ski Areas Association said that if the national COVID incidence rate goes beyond 200 cases per 100,000 inhabitants — as is expected very soon — the Health Pass will be mandatory for skiers from age 12 to access areas, and possibly lifts.

Checks will take place at ski lift sales offices, ski classes, and at the start of ski lifts.

Austria, which is in lockdown, will nevertheless allow skiing for people who are vaccinated or recently recovered from COVID-19, as skiing is classed as physical exercise in the open air and therefore exempt.

There won’t be any of the usual apres-ski, though, and tourists outside the region won’t find it easy to enjoy the slopes: restaurants and hotels are shut, due to the lockdown.

Ischgl, the Austrian resort at the centre of a major outbreak during the early phase of the pandemic in February and March 2020, plans to launch its ski season on Dec. 3. But many other resorts are debating if it is worth opening during the lockdown, which is expected to run until Dec. 13, since the closure of hotels means tourists cannot come.

According to Germany’s automobile club ADAC, which regularly provides information of interest to German travellers, the country’s ski stations plan to open as planned, but with precautions: skiers will have to present a vaccine or recovery certificate, or a negative test, and wear masks on the lifts.

Bavaria, where most of the ski stations are located, has tougher rules: Only people who are vaccinated or recovered will be allowed in, and they will additionally need to present a negative test. The move has been criticized by the German ski lift operators association VDS, which says most lift operators don’t have the staff to cope with the logistical challenge of checking all tests.