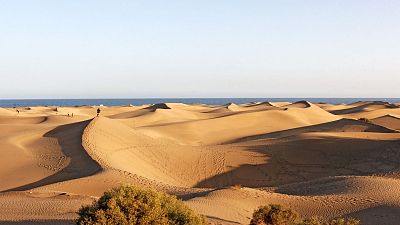 The Dunes of Maspalomas are one of Europe’s last naturally moving dune fields.   -   Copyright  Getty/Donstock
By Lottie Limb  •  Updated: 12/11/2021

Making love at midnight in the dunes of Gran Canaria might sound like a romantic escape for some, but it is having a major impact on wildlife.

Almost 300 ‘sex spots’ made by frisky tourists have been found by researchers in a protected coastal dunefield on the Spanish island.

The Dunas de Maspalomas is a special nature reserve and one of Europe’s last naturally moving dune fields. Tourists have long flocked to the area to enjoy the sandy paradise on the coast, and hotels have built up around it.

But a new report entitled ‘Sand, Sun, Sea and Sex with Strangers, the 'five S's’, shows how cruising is having a destructive impact on the special habitat, home to rare plantlife and birds migrating between Africa and Europe.

Why are tourists getting frisky in the sand dunes?

The Canary Islands draw a big crowd - up to 14 million tourists a year prior to the pandemic. Some of those sun-lovers are looking for holiday romance too, and the dunes have become a well-known spot for those seeking casual hook-ups.

They tend to move further inland to the more vegetated areas where ‘nebkhas’ - dune hummocks that form around plants - afford some privacy.

We're not calling for an end to public sex – but we do want people to be aware of the damage it can do.

"We're not calling for an end to public sex – but we do want people to be aware of the damage it can do," writes Professor Patrick Hesp, one of the reports authors, in The Conversation.

Hesp compared the impact of sexual activity to 4x4 driving; one couple or vehicle is unlikely to do any damage in isolation, but having hundreds converge on the same dunes in a day can lead to “major erosion and habitat destruction.”

What’s the cost of ‘sex nests’ to the environment?

It’s not just the presence of ‘cruisers’ - people looking for public sex - that is having an impact, but what they leave behind. Researchers found that some tourists are removing vegetation to make their own ‘nests’, and dumping condoms and cigarette butts.

He describes a rippling effect on the dunefield tapestry: rare plants disappear first, making it harder for lizards and other animals to run from one vegetated patch to another without being eaten by predators. This fragmenting “can eventually destabilise the ecosystem as a whole.”

Of the 298 sex spots identified in two square miles, 56 were in the Dunas de Maspalomas’ exclusion zones, which are meant to be off-limits to the public.

Sadly it means that there has been a “complete abandonment” of environmental education in the reserve for students.

However hope is on the horizon, writes Hesp, as the research (conducted in 2018) has pushed the government to run a major cleanup operation. Some resort owners are now also discussing the impact of cruising with their guests.